Best Day of the Week to Visit Hollywood Studios

Which is the best day of the week to go to Disney’s Hollywood Studios?

For many years we could rely on predictable patterns as to which days are the best (and the worst) to visit each of the Disney World theme parks.

If you search the internet you will find lots of articles telling you to avoid parks on certain days and visit on others.

But does this advice really work anymore?

I would say that right now, the answer is no.

You have to think of other ways to maximize your time at each of the Disney parks, rather than just relying on lower attendance levels.

Things have changed a lot since March 2020 in all the Disney parks. What worked before simply doesn’t now.

And this is particularly true for Disney’s Hollywood Studios which has undergone a lot of changes, even prior to 2020.

New rides have arrived, shows have been temporarily closed, there are no Fast Passes, entrance numbers are limited, reservations for all Disney theme parks are needed, and things just aren’t quite what they used to be.

All of these changes have meant that advice which used to work perfectly well for visiting Hollywood Studios, is just now woefully out of date and not particularly helpful.

For what seemed like a ridiculously long time, Disney’s Hollywood Studios was the park that really didn’t take a whole day.

And in some ways it still is.

There aren’t quite enough things to do, but the park also has the best Disney World attraction in the universe.

The lack of rides and new attractions, the relatively small size of the park, and just about a decade’s worth of things not really moving forward in Hollywood Studios meant that this was almost the “let’s do that last” park.

The arrival of Toy Story Land improved things quite a lot.

The arrival of Galaxy’s Edge brought a whole other level of magic. And crowds.

Rightly so as Galaxy’s Edge is one of the best things to happen to a Disney park in a very very long time. Yes, even if you aren’t a big Star Wars fan.

So, Hollywood Studios still needs some more attractions to be open, but you really must visit because Galaxy’s Edge is beyond belief amazing.

So is there the best day to visit Hollywood Studios?

Not really right now, but bear with us to see how you can make the most out of your time at Hollywood Studios and why picking the right day to visit is not the only answer to having the best experience.

Everyone has talked for years about the best days to visit the various Disney theme parks. As everyone had a free choice about which particular Walt Disney World theme park to visit on any particular day, certain patterns emerged.

So the advice would be don’t visit Magic Kingdom on a Saturday if you can avoid it. Or avoid Hollywood Studios on Tuesdays and Fridays.

Things aren’t quite so simple anymore.

As reservations have to be made at the moment there really isn’t too much difference in which day of the week is the worst or best to visit Hollywood Studios, or indeed any of the other Disney World parks.

How long will the system that we have to make reservations for each park remain in place?

No one knows the answer to that question right now. All we know is that you can book reservations all the way up to January 18, 2024.

So it seems this system is going to be with us for some considerable time.

Disney’s Hollywood Studios is the smallest of the parks. So logic tells you that fewer people are going to be allowed in each day and be able to make advance reservations.

How Rise of Resistance Changes Your Strategy

If you want to experience Rise of the Resistance (and you really should) there are certain things you need to do to maximize your chances of actually getting to ride.

You probably won’t be surprised to learn that the lines can be long for this amazing ride.

It’s popular and it tends to break down quite a bit – not a great combination.

Initially, when Rise of the Resistance first opened, you had to have a Boarding Pass to ride.

This involved being in the park early and using the My Disney Experience (MDX) app on your phone.

It was a stressful experience because you could miss out in literally a split second.

You would see the guests who got one celebrating whilst you were regretting getting up to go to the park quite so early.

These days we are offered a choice of two options.

Take your chance with how long the line is.

Or pay for Lightning Lane.

At $15 per person, it really is a very individual choice as to whether Lightning Lane is worth it for Rise of the Resistance.

I am not a huge fan of the LIghtning Lane concept but I have given in to this splurge for this ride and even declared it “worth it”.

Genie+ does not work on Rise of the Resistance.

You don’t get an actual time to board, but the rule of thumb is that if the ride is operating, the rate of boarding is about 12 groups per hour.

Note I said if the ride is operating. Unfortunately, Rise of the Resistance breaks down. A lot.

It took my party 2 attempts to actually get on the ride even when we had purchased Lightning Lane ewcwntly as the ride broke down so much we had no chance of riding it.

Having said this, Rise of the Resistance is an astonishingly great Disney World ride – for many the absolute best.

So even though you are very likely to be spending quite some time in that brilliantly themed line, it will be worth it.

Does the Extra Magic Hour make any difference in the best day of the week to visit Disney Hollywood Studios.

The system used to be that if you stayed in a Disney World Resort Hotel you would have access to select parks on a certain day of the week. So Disney Resort guests could access the parks an hour earlier than the general public.

If you had early entry to say, Magic Kingdom on a Monday if you were staying in a Disney World resort hotel, you would probably choose to go to Magic Kingdom that day early in the morning because it gave you a chance of a whole hour of riding the attractions before the general public got it.

So if you were not staying at a Walt Disney World Hotel Resort you would avoid going to the theme park on those days.

Now it isn’t. Not only has the system of having to reserve a Disney World park changed this. But on October 1 2021 the system is going to change.

From that day forwards all Disney World Hotel resort guests will be able to enter the parks 30 minutes earlier than the general public.

This means any Disney World theme park. Disney hotel guests can choose the park they go to early – provided they have a reservation for that park.

This change to the Disney World Park Early Entry Hours will make it less easy to predict which park to visit on any particular day.

Related post – Which Disney World Hotels are the Best 2021

What Time Should You Arrive at Hollywood Studios?

As we have seen, you need to be sure to make reservations for Disney’s Hollywood Studios so that you know that you will be admitted to the park.

Once you have these reservations, what do you do on an actual day, before you even go through the turnstiles?

What time should you arrive at Disney Hollywood Studios?

I would suggest 45 minutes to an hour before rope drop right now. Disney World Hotel resort guests are going to get in first, but it still gives you an advantage if you arrive early.

Most guests still arrive at theme parks after 10 am. I’ve been visiting Disney theme parks for over 25 years and this is still as true as it ever was.

The best tactic is still to arrive early and do as much as you can before the crowds arrive.

This is particularly true of Disney’s Hollywood Studios as you still don’t really need a whole day to see it all. So it is an ideal park to park hop or have as a relatively relaxing day.

Related Post: Where are the Best Restaurants in Hollywood Studios?

Where Should You go First in Disney’s Hollywood Studios?

Really there are three choices here:

Since the new Mickie and Minnie’s Runaway Railway opened, this is where most of the crowds head first thing.

Probably. This is a very popular attraction and it will most likely have lines all day.

Cast Members start lining guests up for this attraction even before the park is open. This makes the line look quite a lot worse than it actually is!

This is because they do not let you into the building before the park opens so the line is outside. This creates the look of huge amounts of guests in a relatively small space.

However, once the park opens, the line starts to move quickly as you are let into the main building which has a large capacity.

Your other choice is to head for Toy Story Land.

You may even be able to ride it twice if you enjoyed it enough to think you want to do it again.

If lines are under 30 minutes ride again now – you probably won’t see times like this again until shortly before the park closes.

You could also go to Galaxy’s Edge first.

If you are a Star Wars fan and this is your first visit, I would say absolutely go right now. Crowds will be lower than they will at mid-day.

The whole land is spectacular and that first view is going to be even better if you are experiencing it will fewer people.

You can also browse around the stores, ride Millenium Falcon: Smuggler’s Run, and Star Tours.

When you visit Galaxy’s Edge will also be related to the time you can Ride Rise of the Resistance.

You don’t get a specific time with your Boarding Pass, but you can always check on the app as to which number they are up to and plan accordingly.

You could also take what is now a more unusual approach and head down Sunset Boulevard to Rock ‘N” Roller Coaster and Tower of Terror.

However, it is usually better to wait for later in the day for these thrill rides as the lines tend to be shorter.

Are you planning a Walt Disney World Vacation? These articles will help:

Art of Animation or Pop Century?

Which Disney Animal Kingdom Resort Rooms are the Best?

Do you think there is the best day of the week to visit Disney Hollywood Studios? 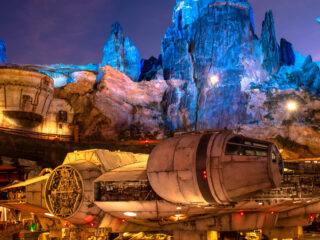 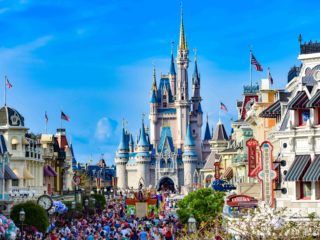 A great place to visit any day you are able to.*