Monsters University A113 and the Pizza Planet Truck

Where does A113 appear in Monsters University? Having just seen the movie this morning and as a very dedicated Pixar fan I was of course looking for the familiar ‘Easter Eggs’ we have come to know and love in the Pixar movies. The most famous are the A113 references and the Pizza Planet Truck.

The A113 reference has appeared in every Pixar movie and originates back to John Lasster and Brad Birds days at CalArts. A113 was their CalArts classroom number. The Pizza Planet truck has appeared in all the Pixar main features except The Incredibles. This started with Toy Story where Pizza Planet is a restaurant in the movie.

If you look very carefully on the international movie poster above you can see on the alarm clock on the right hand side that the time is 1.13. No A of course but the numbers are definitely there.

The most obvious A113 reference I think I saw was on Mike and Sulley’s Scare Classroom at Monsters University.

Where is the Pizza Planet Truck in Monsters University? I have to be honest and say I didn’t spot it on the first viewing. I will be checking this out in the next few days but out helpful readers have told us they saw it during the sequence where Mike and Sulley are chasing the pig, near the Roar Fraternity House.

There are also other references to Pizza Planet in Monsters University. As you will see from this picture it would seem that Mike is enjoying a pizza from somewhere so it really makes sense it is Pizza Planet.

Pixar movies are also known for featuring characters from future and past features. We think that we saw Dinosaur toys on the floor on the bedroom floor in the scare competition.

I also noticed a Cars reference with the bus which Mike boards near the end of the movie – it has a Cars design number plate on the front of the bus.

Leave me a comment below if you saw A113 or the Pizza Planet truck in Monsters University! 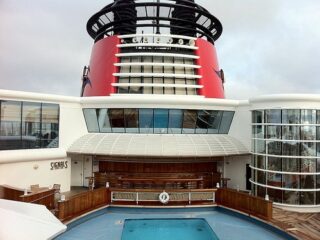 monsters university monthropology behind the scenes

[...] If you are a Pixar fan you may like to see our discussion of Monsters University A113 and the Pizza Planet Truck [...]

In Sully's simulator test in the competition hangs the mobile from Boo's room.

The pizza planet truck appears when mike is riding the scare pig its park next to the roar fraternity house.

I too saw A113 on the door, but missed the Pizza Planet Truck. However during the first Scare Game, the banner announcing the challenge Had the Luxo Jr. Ball! I'm certain this film also has a Boo reference SOMEWHERE, but missed that as well.