Whilst not the main attraction in the parks, the roller coasters in Disney World are sure to impress coaster enthusiasts.

They’re not as crazy as the ones at other theme parks like the Six Flags amusement parks, but they stand out because they have incredible theming that immerses you into another world.

Today, we’ll rank all the roller coasters at Disney World from worst to best.

How Many Roller Coasters are at Disney World?

There are only eight roller coasters in Disney World. That number may surprise you.

However, we are talking about something more than just a roller coaster. The rides at Disney World really are not like anywhere else.

They have themes and stories that immerse you in an experience. Not just a roller coaster ride.

Also, there is another roller coaster soon to join this collection – Tron Lightcycle Run will open sometime in Spring 2023.

The exact date has not been announced yet but at D23 in 2022 it was confirmed that it would be Spring.

Let’s first have a look at a list of all eight of the coasters across the four theme parks:

Magic Kingdom has the most roller coasters out of the four parks. They’re all catered toward families, so none of them are that intense.

Epcot opened its first coaster in its 40-year history, and wow, is it a great one!

Rockin’ Roller Coaster Starring Aerosmith is the only roller coaster in Disney World with an inversion. I’d also say it’s the most intense.

Animal Kingdom did have a second coaster, Primeval Whirl, which was in Dinoland U.S.A. It was a spinning roller coaster. It closed down in 2020, with no announcements on what will replace it.

What are the Height Requirements for Each Roller Coaster?

It is always important to know the height requirements for Disney rides so that you can set expectations for the kids in your party. It’s no good junior dreaming of going on Space Mountain if you get to the park and realize they just aren’t tall enough yet!

Which are the Best Roller Coasters in Walt Disney World?

Let’s look at all the Disney World roller coasters and rank them from worst to best.

All the roller coasters are eligible for Genie+ with the exception of Seven Dwarfs Mine Train and Guardians of the Galaxy: Cosmic Rewind. These two attractions have the option of purchasing Individual Lightning Lane.

Board Goofy’s stunt airplane and soar over Storybook Circus.

This is a small, kids coaster that’s perfect for the little ones. The best part about it is all the little gags scattered throughout the ride.

My favorite is the Goofy-shaped hole in one of the signs, showing that he had crashed through.

Other than that, it doesn’t have much. Even the theming is a little lackluster.

Space Mountain is a roller coaster that takes you through the depths of outer space.

Located in Tomorrowland, this thrill ride first opened on January 15, 1975.

The scariest part is that it’s in near-pitch-black darkness, meaning you can’t see where you’re going to go next.

Next to Big Thunder Mountain, this is probably one of the most intense roller coasters at Magic Kingdom. The drops are steep and catch you by surprise.

It’s fast and the suspense of not knowing where you’re going adds to the thrills. Well, it feels fast anyway, but in reality, only reaches a top speed of 27 miles per hour.

I also love the theme of the attraction.

When someone thinks of roller coasters at Disney, the first one that comes to mind is Space Mountain. It’s been one of the most popular rides for decades.

So why is it almost at the bottom of the list?

This is just my personal opinion, but this is honestly one of my least favorite attractions at Disney World.

I ended up hurting my back the last time I went on it! Take those warnings seriously and you really should avoid this ride if you have any health issues such as back and neck problems.

Plus, even though it’s dark, you can faintly see all the beams that hold the track and just how close they are to your head… Of course, it’s impossible to hit them, but they’re still very close. Lots of people are fine with that, but I, along with many others aren’t so keen…

The swinging mine cart is a very unique ride vehicle and it offers a lot of thrills as you swing around the twists and turns of the track.

It’s a great coaster for families. It’s very tame so kids can enjoy it, but it also has a couple of speedy moments for adults.

The best part is the slow section through the Dwarfs’ mine. The animatronics are amazing and use state-of-the-art projection mapping, making them look very real.

The only downside is it’s very short. It only lasts around two minutes, so for some, it’s not worth waiting in the ridiculously long line.

You can purchase Individual Lightning Lane for the Seven Dwarfs Mine Train, however, it really wouldn’t be top of my list to splurge on this experience.

Known as the wildest ride in the wilderness, Big Thunder Mountain is a thrilling roller coaster through the desert mountain of Big Thunder.

Head on over to Frontier Land is Magic Kingdom to find this always popular roller coaster.

You’ll go into the abandoned mines, speed through a ghost town, and even ride through a giant dinosaur fossil.

This is another coaster that’s great for families.

It’s a step up from Seven Dwarfs Mine Train in terms of thrills.

It has some big air-time moments where it drops and you fly off of your seat.

It’s a little more intense, but it’s still pretty tame. This one doesn’t have any loops and while the drops are a shock, they are small.

The scenery is especially impressive in this attraction. Big Thunder Mountain has so much detail, that it truly feels like a real desert landscape.

Best Order to Visit the Disney Parks – Does it Really Matter?

This is a thrilling family roller coaster based on Slinky Dog from the Toy Story movies.

The story of the attraction is that Andy has built a massive “Mega Coaster Play Kit” in his backyard. You’re shrunk down to the size of the toy, so small everyday items, such as a pencil, now tower over you.

It’s so much fun seeing all these enlarged everyday objects. One of my favorite details is the fact the roof of the loading station is actually a massive game board.

This ride actually has not one, but two launch sections. They aren’t as fast as Rockin’ Roller Coaster, but they do pack a punch.

It also has a couple of great air-time moments where you get lifted off your seat.

It looks tame on the outside, but once you ride it, you’ll find that it actually has plenty to offer thrill seekers.

Located right next to Tower of Terror, Rock ‘n’ Roller Coaster is a thrilling roller coaster in the dark where you blast through Hollywood while listening to rocking Aerosmith tracks like “Sweet Emotion” and “Walk This Way.”

This is the most intense roller coaster at Walt Disney World. It’s the only roller coaster with inversions and it’s the fastest, reaching a top speed of 57 MPH.

The best part is the exhilarating catapult launch, which shoots you from 0 to 57 MPH in 2.8 seconds.

Something I like about the attraction is each ride vehicle features its own Aerosmith track.

Some play “Walk This Way,” while others play “Love In An Elevator,” and the rest play other Aerosmith songs.

That way, you have the potential to have a different ride experience each time, depending on which ride vehicle you get.

This is Epcot’s first and only roller coaster, as well as Disney World’s first Marvel attraction.

You are enlisted by the Guardians of the Galaxy to try and stop a celestial from destroying the Earth. On goes a chaotic space battle where the fate of the entire world is on the line.

It’s similar to the Hyperspace Mountain and Space Mountain – Ghost Galaxy overlays at Disneyland, in that they have projections of the space battle on the walls and it’s in the dark.

This ride uses a unique spinning roller coaster vehicle that has full 360-degree control. So it turns you toward the show scenes and spins you around along the track, making it a one-of-a-kind experience.

It’s also the first roller coaster to have a backward launch.

My favorite part though is the music. The soundtrack really is what makes this ride a standout.

Similar to Guardians of the Galaxy – Mission: Breakout over at California Adventure, this ride plays a song from a random selection of six songs.

Each time you ride it, one of those six tracks is selected to play throughout the duration of the roller coaster.

The six songs are –

My favorite is “Everybody Wants To Rule The World” by Tears For Fears, but all of them are certified bangers.

This roller coaster is a huge amount of fun and very intense, even though it doesn’t have any big drops or inversions.

The only reason I put this in second is the story is pretty weak. It’s a little convoluted and a lot of the jokes fall flat.

This is a new and very popular ride. This is not a Genie+ attraction, but you can pay extra for Individual Lightning Lane.

This is a thrilling roller coaster through a near 200-foot replica of Mount Everest.

It’s a perfect roller coaster that combines thrills with a great story.

The story is that you’re going on a daring expedition to Everest. However, in the queue, you see compelling evidence that the rumors of the Yeti who guard the mountain might be true.

Then on the roller coaster, you see strange fresh tracks on the snow. You turn the corner and see that something has torn apart the tracks ahead.

Next, you’re sent backward, into the deepest darkest caves of the mountain.

Disney’s Animal Kingdom Expedition Everest ride is filled with atmosphere. In the queue, you get eerie glimpses of Everest towering in the distance, building up the tension.

The roller coaster is a lot of fun. It has a backward drop, a steep 80-foot drop, and reaches a top speed of 50 MPH.

It’s intense, but families can still enjoy it. It does not have any inversions.

It’s a great mix of thrills and storytelling, making it the best roller coaster at Disney World.

What is the Best Day to Visit Disney World? 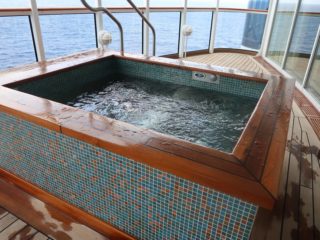 Disney Cruise Rainforest Room - Is It Worth The Cost? UPDATED 2022
← Read Last Post