There is no official word as yet but many are hoping that there will be an announcement at D23 in Anaheim in August. Disney is certainly not being reluctant to make investments to increase park attendance. Cars Land in Disney’s California Adventure Park along with other improvements cost $1 billion – but they have been rewarded with a 22% park attendance increase for their money. The rumors are also that Disney Hollywood Studios will be getting a Cars Land very similar to the one in California.

What do the rumors say is planned for Disney Star Wars Land? Theme Park Insider has some interesting ideas. Of course the logical place to expand is near the existing Star Tours Ride. Really it couldn’t be anywhere else particularly after Star Tours has had a relatively recent complete revamp.

If you think about the layout of Disney Hollywood Studios near Star Tours there is probably only one logical way to expand – by taking out the Muppet Vision Theater and extending along The Streets of America as far up as Honey I Shrank the Kids. Then the new Cars Land would most likely be in the area of Lights Motors Action and The Backlot Tour. The only other way they may go is towards Indiana Jones Stunt Spectacular. However just think about it. Indiana Jones is still a very popular attraction. Whilst many (including me) would be very sad to see The Muppets go it is an attraction which is not that popular any more, and Honey I Shrank the Kids could easily go.

Of course right now everything is speculation but we can dream about what the new Star Wars Land would look like. A new restaurant is almost a given, as well as a huge new attraction to rival Forbidden Journey in Wizarding World of Harry Potter.

What would you like to see in a Disney Star Wars Land? 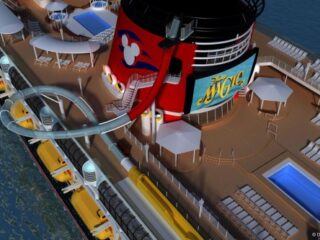