What can you expect if you are visiting Walt Disney World in April 2012? Here is a guide to crowd levels, events and refurbishments for the month of April 2012 at all the Disney World parks.

Is April a Good Time to Visit Walt Disney World?

If you are looking at the weather then April is one of the best times to visit Walt Disney World. The temperatures are usually in the high 70s and low 80s and the chances of rain is on of the lowest of the year. Night time temperatures are pleasant too so perfect for visiting the theme parks in the evening.

Crowds are a mixed bag in April. There is the good and the definitely not so good news about visiting Disney in April.

The first half of the month is likely to be one of the busiest times of the whole year. Spring Break and Easter are in the first 2 weeks of April and crowds are likely to be very heavy. If you have a choice then this is not the best time to visit. Wait until after 15th April and the parks are likely to have much lighter attendance and those lines are going to be much shorter.

If you do have to visit the first 2 weeks of April then you can be comforted by the fact that the park opening hours will be extended and there will be extra performances of fireworks and parades scheduled.

The very popular Big Thunder Mountain in Magic Kingdom is closed until May 27th 2012. This will have a significant impact on waiting times for Splash Mountain which is located in the same area of Magic Kingdom. If you want to ride Splash Mountain make sure that you arrive early or get a Fast Pass.

There is also a lot of construction going on in the Fantasyland area of Magic Kingdom but this will not affect visitors at the present time. The construction area is blocked off and is located in the Mickey’s Toon Time Square area which is now permanently closed.

Lights Motors Action the cars stunt show in Disney Hollywood Studios is closed from April 29th to May 2nd.

Epcot does have a couple of closures the most significant of which is Test Track which is closed for refurbishment from April to September 2012.

The Tutto Italia Ristorante is closed until April 27th. There is an alternative restaurant in Epcot Italy so if you would like to eat Italian food then visit neighboring restaurant Via Napoli.

The House of Innovention is closed in Epcot Innoventions until May 2012. Let us hope that they are updating it with something rather more interesting inside!

The annual Epcot Flower and Garden Festival runs throughout April 2012 (the dates this year are from March 7th to May 20th 2012). This is a very popular event for Epcot and is does draw additional visitors to the park particularly on the weekends.

There are also HGTV celebrities scheduled to present the concert series. Here is the 2012 schedule:

If you are visiting Walt Disney World in April 2012 have an amazing vacation! 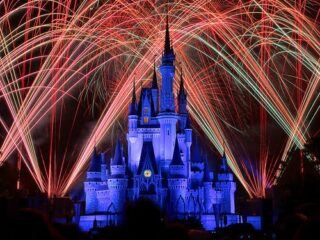 [...] The Epcot Flower and Garden Festival runs until 20th May. This very popular annual event does affect crowd levels, particularly on weekends. For full details of events go to my guide to events in at Walt Disney World April 2012. [...]