Which Disney Park Has The Best Haunted Mansion?

The Haunted Mansion is one of my absolute favorite Disney attractions. I have a ton of Haunted Mansion merchandise – a mug, tie, poster, hat, pin-trading lanyard, three t-shirts, as well as the sign at the entrance of the ride hung up on my wall.

I know the history of the attraction like the back of my hand. I could probably recite the entire Ghost Host monologue (in a very bad impression of Paul Frees) back-to-front. I even know the names of the Hitchhiking Ghosts (Phineas, Gus, Ezra).

None of that will ever help me progress in life any shape or form, but I’m still a proud super-fan.

Something I find especially interesting is the differences between the multiple renditions of the attraction at the Disney parks.

There are currently four Disney parks that have a Haunted Mansion attraction – Disneyland, Magic Kingdom, Tokyo Disneyland, as well as one in Disneyland Paris with a different name, Phantom Manor.

We’re going to compare and contrast all of these attractions, ranking them from worst to best.

Which Disney Park Has The Best Haunted Mansion?

I won’t be counting Mystic Manor at Hong Kong Disneyland as a Haunted Mansion attraction.

In the first draft of this article, I included it in, but I realized it barely had any similarities to the other variations of the attraction, so I excluded it off the list. The only similarity I could think of was that it took place in a big house and there are lots of effects – that was it.

The original Haunted Mansion. But really not the best.

Something none of the other versions have is the Hatbox Ghost, a character in the attic scene who was taken away only a few days after opening day because his disappearing head effect didn’t work properly but was then reinstalled in 2015 for the 50th anniversary of Disneyland.

This ride also has the seasonal Haunted Mansion Holiday overlay, where they add in characters from Tim Burton’s The Nightmare Before Christmas, making the attraction’s theming much different.

The re-theme is fantastic, and quite possibly the best seasonal attraction at the Disney parks.

Unlike Magic Kingdom’s version of the attraction, this one doesn’t include the library, haunted staircases, eyes in the wallpaper effect, or the CGI Hitchhiking Ghosts at the end, meaning the ride is little shorter.

This one is almost exactly the same as Magic Kingdom’s version.

The first difference you’ll see is in the portrait hallway. The people in the portrait’s eyes follow you as you go by – there is no transforming effect.

Also, there aren’t windows looking out to the stormy night – it’s just a windowless hallway with portraits on either side.

The portrait scenes at Tokyo and Orlando are as good as each other. Magic Kingdom’s version creates a very moody, dark, and scary atmoshere with the rain crashing against the windows. Tokyo’s version is creepy, disturbing, and sends chills up and down your body as the eyes in the portraits never break their stare.

While Tokyo does have the library scene, there is staircase scene like at Disney World. Instead, it’s a dark incline with two big spiders caught in spider webs.

This is what puts it below Disney World’s version for me: the spiders feel like a cheap gag. They look like something you’d find at a Halloween store. The thing is also, there isn’t anything else to look at – the rest of the scene is just pitch black. This feels like nothing compared to the elaborate and creative staircase scene at Magic Kingdom.

They also don’t have the glowing eyes in the wallpaper after the incline.

Another scene that’s very different is the Attic scene. It’s closer to Disneyland’s original attic scene where ghosts pop-out from behind boxes as well as the flying bats.

It also lacks the creepy piano cover of “Here Comes The Bride,” the portraits of the disappearing heads, and the projection bride effect, which is instead an animatronic.

Out of the all the renditions of the Haunted Mansion, this has the weakest Attic scene. In other versions, the bride story is made much more clear, the music adds a great omnibus tone to the scene, and there a lot more props.

Another difference is the Tokyo version doesn’t have the CGI Hitchhiking Ghosts, which is another reason why I put it below the Disney World version.

Something the Magic Kingdom’s attraction doesn’t have though is the Nightmare Before Christmas overlay, much like Disneyland’s version, but with a few additional scenes.

This version of the Haunted Mansion is much different from all the others. The two major differences are the story and tone. Phantom Manor is definitely one of the Best Rides in Disneyland Paris.

The Haunted Mansion attractions at the other parks don’t follow much of a story. All it boils down to is a tour of a haunted mansion.

Phantom Manor tells a different story about a groom who committed suicide on his wedding day. The Bride waited for hours at the altar, not knowing about the incident, still believing he would show up. Unbeknownst to the Bride is that it was actually a spirit called the Phantom, who is heavily implied to be her father, that murdered her groom.

Years after that tragic day, the Bride still cries by herself at Phantom Manor over the disappearance of her groom, while the echoes of the mysterious Phantom echo through the halls of the manor.

As you can see, the story and tone is much, much darker than the other versions of the Haunted Mansion. Those variations balance a dark, spooky tone alongside a very light-hearted humorous tone, while this one features a murder as well as a Phantom tormenting an innocent woman who then falls into a deep depression.

Besides maybe ExtraTERRORestrial Alien Encounter, this is the darkest attraction Disney has ever created.

The ride is much scarier than the other renditions as well. The descent into the graveyard is a prime example where skeletons break out of their tombs.

Most of the classic Haunted Mansion scenes are in the attraction, although they’re changed to fit the story, such as Madame Leota’s monologue being changed to a call for all spirits to go to the Bride’s wedding.

The Bride also makes an appearance in the ballroom, loading area, and endless hallway. Additionally, it’s the Bride who boards your vehicle at the end, not the Hitchhiking Ghosts.

Only two scenes are changed significantly in this version. The Attic Scene is turned into the Bride’s bedroom where you see her crying over her fiance who didn’t show up to their wedding.

Instead of the Graveyard Scene, they have an old western town that’s now inhabitated by ghosts. The only similarity is the singing busts.

Another major difference is the Ghost Host has a different monologue and is voiced by Vincent Price instead of Paul Frees.

What I like about this version is the dark tone. It’s interesting to see Disney creating such a scary attraction complete with a really dark and tragic story.

Phantom Manor also feels much more cinematic than the other Haunted Mansion rides with its detailed story and massive sets. To add to that, it has the best soundtrack out of all four variations. It might even be the best piece of music composed for a theme attraction.

This is almost the same as Tokyo Disneyland’s version, just with a few differences here and there.

One of those is the interactive queue, which includes lots of Haunted Mansion themed games to entertain you as you wait in line. Some argue that the light-hearted nature of some of these interactive games ruin the spooky atmosphere, but I don’t mind so much as the games are a lot of fun.

Also, instead of just moving their head from side-to-side like on other versions of the attraction, the Hitchhiking Ghosts play tricks on you, wave at you, scare you, as well as much more.

I love everything about this variation. The story is fantastic, the effects are jaw-dropping, it creates a great gothic atmosphere, all the characters are memorable, it’s funny, it’s scary – I could go on and on. I honestly can’t think of any problems I have with it.

Which Disney Park Has The Best Haunted Mansion? Leave me a comment below! 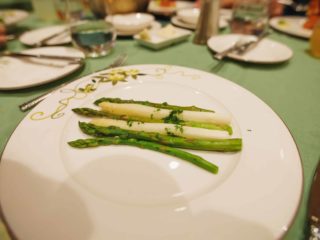 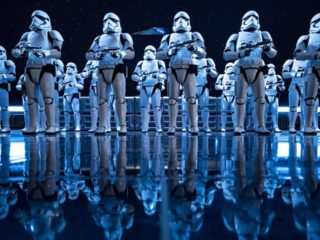