Disney Frozen Let It Go is undoubtedly one of the best Disney movies songs in decades.

Now you can hear Disney Frozen Let It Go in 25 languages.

This is an absolutely fascinating insight into the way that Disney’s Frozen and Let It Go have been interpreted into all these different languages.

Rick Dempsey is Senior Vice President of Creative Disney Character Voices International (how much do I seriously want that job).

It is his task to find voice talent for Disney animated movies in foreign languages. For Frozen that meant 41 different languages.

Disney movies have become so much more international in recent times – for The Lion King they only had 15 different languages to find.

Obviously, it is no small challenge to find a voice that matches up to the amazing talent of Idina Menzel.

But as you will hear from the video it is certainly something that Dempsey accomplished.

Interestingly Dempsey himself only speaks English. In some ways, this is probably an advantage as he can focus on the sound rather than the words.

They all compliment Idina Menzel but add a different dimension according to their language and culture.

So who are the voices behind some of the other languages in Disney’s Frozen Let It Go?

Gisela sings the Spanish Castilian and Catalan versions, actress Serena Autieri voices the Italian rendition. Willemijn Verkaik who is a musical theater star in The Netherlands sings the German and Dutch versions.

Which is your favorite of the 25 Let It Go versions? 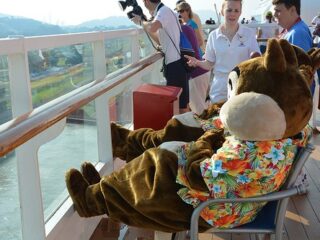