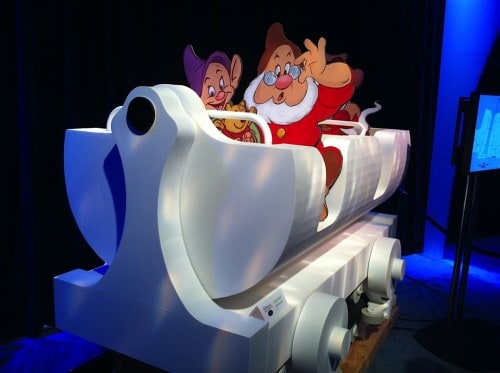 It looks as though the new Seven Dwarfs Mine Train Coaster which is being built as part of Magic Kingdom’s Fantasyland expansion is going to be a fun ride. As you will see from this video the ride vehicles swing from side to side. This is a innovative new ride system from the Disney Imagineers. Interesting to see how they can design it so that is is fun without making you feel just a touch of motion sickness! Of course this is Disney Imagineering so we know they will make it a great ride.

The Fantasyland expansion is now well under way and all attractions are expected to be open by 2013. The inspiration for the new coaster ride is of course Disney’s classic movie Snow White and the Seven Dwarfs. The new Snow White ride will replace Snow White’s Scary Adventures which was one of the original attractions when Magic Kingdom opened in 1971. I know that this has sparked a lot of emotion and many comments on this post:

The new Fantasyland will have an area which is dedicated to Snow White which will include the Seven Dwarfs Mine Train Coaster and will feature Snow White’s Cottage. There will be an opportunity to meet Snow White in the Disney Princess Fairytale Hall.

I am very dissapointed to hear this. Those of us who do not like rollercoasters find this ride amusing! The visual was cute and my kids were both a little scared and thrilled to go on this ride! I only wish this could be saved just for the value of somthing that was original to the park and something of historical value.! What is next? Peter Pan's ride?