Harry Potter and the Forbidden Journey is one of the best theme park attractions in Orlando. This is a bold statement from someone who confesses they are a little obsessed with Disney.

However, the Forbidden Journey is such an amazing experience that it deserves a very special mention as a definite must see if you are visiting the Orlando theme parks. It is thrilling, very unique, and certainly a one of a kind.

Wizarding World of Harry Potter is a collection of rides, shops and attractions at Universal Islands of Adventure in Orlando.

It has proved to be an enormous success and has increased revenue for Universal Resorts by almost magical amounts.

For one reason. It is very very good. It is an amazing interactive experience and The Forbidden Journey is a wonderfully innovative ride which is housed inside Hogwarts Castle.

The first thing which you will notice is that Hogwarts looks huge. Of course, there is the now much-used design innovation of forced perspective – in other words making structures look larger than they really are.

Cinderella’s Castle in the Magic Kingdom is, of course, the classic example of this.

Now if you do not want spoilers then stop reading and looking right now. Be warned here follows a description of the line and the ride itself!

We all know that standing in line is not the most entertaining thing to do. But in Wizarding World of Harry Potter Universal has done a huge amount to make the experience something that you enjoy rather than endure.

True, sometimes nothing is going to help when the lines are 2 hours long,. However, the line for Forbidden Journey is a magical experience for anyone who has read the J.K Rowling books or seen the movies (isn’t that most people)?

You enter the imposing Hogwarts Castle doors and step inside a darkened stone corridor.

On your right are the lockers. Not that interesting but if you do have any bags to stow you can’t take them on the ride so you need to leave them here!

One huge tip as to how to save time waiting in line for Forbidden Journey is to skip the locker line. The long line you see outside the castle is for the lockers.

This is rather confusing but if you do not have a bag (or if you have stowed it in a locker near the Hogwart’s Express as you enter Wizarding World) you can take a different entrance by going through to the locker area via Filch’s Emporium.

Then go straight into Hogwarts and join the line for the ride. This works well at the moment, but not sure how long it will as more and more people become aware of this!

Another tip? There is a Single Rider line. You will find out when you get on the ride that it really is not a shared experience anyway. You cannot see or interact with the person next to you – so the single rider option is a good one for those who do not have younger children.

Once you enter Hogwarts you are soon out in the open air again – in Madame Sprout’s greenhouses. This is probably the most frustrating parts of the line as it snakes around and around and has little of interest compared to the interior of the Castle.

Once you get back inside again there are lots of things that Harry Potter fans are going to be very excited to see. It is dark inside which all adds to the atmosphere but makes it very difficult to get good photos!

However, there are many treasures inside which will delight Harry Potter fans. The talking portraits are wonderfully real. You even get to see inside Dumbledore’s office where the headmaster of Hogwarts will welcome you to the castle.

Winding a little further around the line you will enter the Defense Against the Dark Arts classroom. Harry Potter, Ron Weasly and Hermione Grainger all appear by the magic of holograms to talk to you.

The effect is amazingly realistic. You may not realize that there are three different versions of the interaction between the characters. All are entertaining to watch and if the line is slow you will get to experience each of them.

Once you are safely boarded on your bench the ride begins. At first, the bench moves slowly sideways. And it seems to take an age to start the ride properly as at this point you are wondering what is in store for you – that secure harness must mean you are in for an exciting ride!

Soon you see Hermione and you will be transported in a very quick puff of green smoke by the floo network to the observatory.

It is at this point that you begin to feel as though you are flying through the air. This is the pleasant bit! You fly over Hogwart’s looking down – so this is what it must feel like to fly on a broomstick!

Suddenly Ron and Harry appear and they want you to join them for a Quidditch match. Hagrid appears on the ground and you slow down near to the ground to hear him ask if you have seen a dragon.

Guess what. Of course, a huge dragon appears next. A fire breakthing dragon. Well sometimes it breathes fire but a number of times I have experienced the ride the fire effect is not working so this rather spoils the moment!

After escaping the dragon and dodging the burning bridge there is worse to come – if you don’t like spiders (I don’t) then this is the difficult bit of the ride.

I can now just about get through it with open eyes for the whole sequence. Perhaps this is extreme aversion therapy. The Acromantulas are big. Then they get bigger. Then they start launching venom at you.

Then  Aragog the very very big spider is right in front of you! Your ride vehilce seems to be moving at a fast twisting pace at this point. The first time I rode this it was definitely the point where I thought I didn’t want to do this again.

Thank goodness Hermione appears in time to save you from the spiders. She tells you to watch out for the Whomping Willow so of course, you know that is somewhere not too far ahead.

This is one of the best bits of the ride for me. This is where the technology of the ride vehicle really shines and you are moved on to your back and the Whomping Willow appears over head. A bit of a bumpy ride!

Soon you are flung back on to the Qudditch pitch where you are joined once again by Harry who has been wondering where you got to. Flying through the Quidditch match is a lot of fun, and for the moment you feel safe as you are not being chased by anything, having fire breathed on you, or venom spat at you.

But just don’t get too comfortable as things are about to turn dark again. Encountering Draco Malfoy on the Quidditch pitch is the least of your worries.

Yes, I know they aren’t really real, but in that moment you are flying through them your brain is not being very rational. They seem real.

Whatever the technicalities of the effect you are not aware of how this is being done. You feel as though you are in the middle of the Chambers of Secrets with the Dementors.

This is the point in the ride when I realized that my 8 year old boy who was waiting for my verdict on whether he would enjoy the ride, would be terrified beyond belief. He is a huge Harry Potter fan but this was just going to be way too realistic for him.

Many years have passed and my 8-year-old son is now a teenager who has experienced Forbidden Journey many many times!

When you have experienced the ride for the second time the effect of the Dementors does diminish quite a bit.

Not sure why this should be so, as that first encounter is so scary. One of the better effects, if it is working, is the Dementors Kiss.

You should see your own image being sucked out by the Dementor. An amazing effect but unfortunately it doesn’t quite work every time. Another reason to experience the ride many times.

You notice many more details and effects. And if you are like me you may even graduate to having your eyes open for most of the ride!

Of course, Harry Potter is there to save you with a well timed Expecto Patronum. The Chamber of Secrets begins to crumble and you are reassured by Harry telling you ‘We’ve made it’.

Then comes a relatively relaxing flight above the beautiful landscape surrounding Hogwarts. The end of the ride is a slow return to the back of the loading platform when ou travel through the Great Hall at Hogwarts and see lots of your favorite Harry Potter characters.

There is a huge sense of relief that nothing scary is going to come back at you. And then of course you wonder how long the line is so that you can get straight back onto the ride. 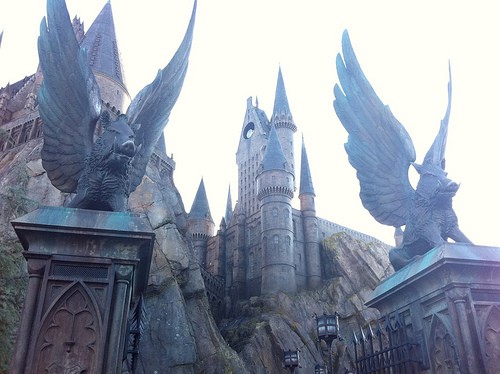 Does this ride actually drop or is it simulated?

There isn't an actual drop. The ride vehicle does move around a lot but it is pretty smooth. You do get tipped onto your back but you are no where near upside down!

Enter for a Chance to Win a Family Vacation to Universal Orlando® Resort! | - "Deal" ectable Mommies