Disney World Monorail Hotel Resorts – Which Should You Choose?

The Disney World Monorail Hotel resorts offer some of the most luxurious and convenient of all of the Disney resorts, but which one should you choose for your vacation?

Here we look at the advantages and disadvantages of each of the Disney Monorail Resort Hotels so that you can decide which is best for your vacation.

Each of the Disney World monorail hotel resorts has a very different style.

The monorail resorts are:

They are all located on the Disney Monorail loop which runs around the Seven Seas Lagoon. This means that they are ideally located to visit Disney’s Magic Kingdom.

If you are staying at a Disney monorail hotel you will have the easiest access to Magic Kingdom of any of the Disney hotels. You just can’t be any closer to Disney’s Magic Kingdom.

The monorail runs regularly from each hotel to Magic Kingdom and the Transport and Ticket Center or TC as it’s known.

If you take a monorail to the TTC you can board another monorail and travel to Epcot.

Travel to other Disney parks and resorts from the monorail loop hotels is even easier since the Skyliner was built.

Now it is easy to hop on the monorail from the resorts to the TTC and Epcot. Then you can board the Skyliner at the World Showcase entrance to Epcot and be in Disney’s Hollywood Studios in no time.

The Skyliner is a much quicker way of getting from Epcot to Hollywood Studios than the boat transportation system – but you may prefer to do that if you are not a fan of the cable car system.

Disney bus transportation is also offered to all other parks, resorts, and Disney Springs from the monorail hotels.

Bus transportation or car is the only way to get from the monorail hotels to Disney’s Animal Kingdom. However, this is true for all Disney hotels, as Animal Kingdom park is not part of any transport system except the bus system.

However, nothing beats the convenience of being able to travel on the monorail or walk to Magic Kingdom.

The Grand Floridian is Disney’s flagship hotel. The grandest Disney World hotel of them all. Luxurious it may be, but you will feel just as at home in a Mickey Mouse hat and shirt as you would in a tuxedo.

As soon as you walk into the lobby of The Grand Floridian Hotel you know that you are somewhere very special.

Even if you are not staying in the hotel I always suggest that if you have some time you visit. It’s fun just to see this luxurious hotel and take some time people-watching in the beautiful lobby.

The Grand Floridian resort covers over 40 acres and has 2 swimming pools, some of the best restaurants in Disney World, a spa, a beach, and even a wedding pavilion.

The Grand Floridian hotel has 867 guest rooms. If space is what you are looking for then the Grand Floridian Resort rooms are a very generous 440 square feet. Most have two queen beds and almost all rooms have balconies.

You can see our guide here at Disney Grand Floridian – Which Are The Best Rooms?

There are many rooms that overlook the Seven Seas Lagoon and the Cinderella Castle. These are the most popular and also among the most expensive room choices at the Grand Floridian.

If you are looking for old-style grandeur but with those subtle Disney touches then Disney’s Grand Floridian is a great choice.

It does come at a price of course as it is one of the most expensive of all of the Disney World resorts. Rack room rates for the Grand Floridian start at around $667 per night in Value Season and go up to over $2000 a night for a suite.

Of all of the Disney Monorail Hotels, the Grand Floridian is the one that is last on our list to stay at. It is a beautiful resort, but we would rather stay somewhere for a lower rate and spend the money elsewhere.

Disney’s Contemporary Resort is instantly recognizable for its A-Frame design and of course for the rather unique feature of having a monorail running right through it!

The Contemporary Resort has 2 very distinct and separate buildings. The first is the main building with the A-Frame design. This is the more expensive of the options and has some of the best views of Magic Kingdom and Seven Seas Lagoon from select rooms. This is the Tower.

The other building is known as The Garden Wing. This is less desirable (but less expensive) than The Tower.

The Garden Wing does not have the best views, and they are not as convenient for the monorail station. However, the Garden Wing at the Contemporary is still a great choice because of the updated furnishings, room size, and lower price.

We have written a guide for you so that you can compare the rooms and see which one would be the best choice for your family.

Walt Disney World Contemporary Resort – Which Are The Best Rooms

Some people feel that the furnishings and design of the Contemporary Resort are not quite Disney enough. For some of course this may be a plus point! It is a great choice of Disney World Monorail Hotel Resorts.

Disney’s Contemporary Resort has an excellent location, some good restaurants, and offers very comfortable, modern rooms. The swimming pool is rather disappointing though as it just doesn’t offer much in the way of theme which is disappointing for a Disney hotel.

The Contemporary Resort room rates start at around $425 for the night and go to over $2,000 a night for the suites.

Disney’s Polynesian Resort and Spa is my favorite monorail hotel. It is always very much a personal choice but for me, this offers everything my family needs for a Disney World hotel.

The location is of course excellent as The Polynesian Hotel is right on the monorail so it takes you minutes to get to Magic Kingdom. The ambiance of Disney’s Polynesian is just very special.

Disney’s Polynesian Resort has a relaxed South Seas theme with a welcoming tropical atmosphere. It has one of the best swimming pools, a sandy beach, exotic waterfalls, excellent restaurants, and recreation facilities.

The Polynesian also has some of the biggest rooms in the whole of Walt Disney World. Standard rooms are around 410 square feet, with some 476 square feet rooms are located in the Tokelau, Rapa Nui, and Tahita longhouse buildings. That is a lot of space, even if you have a family of 5.

For a complete guide to Disney’s Polynesian Resort go to:

Room rates at Disney’s Polynesian Resort start at around $508 in Value Season and rise to over $2000 for the suites.

My choice is usually Disney’s Polynesian when we are staying at a Disney Monorail Hotel. I love the style and size of the rooms, the resort ambiance, and the swimming pool.

If you are more of a fan of old-style glamor and have the budget to support it then the first choice would be Disney’s Grand Floridian. For me, the final choice is Disney’s Contemporary Resort – a great choice for many but just not Disney enough for my family.

Which is your favorite Disney World Monorail Hotel Resort? 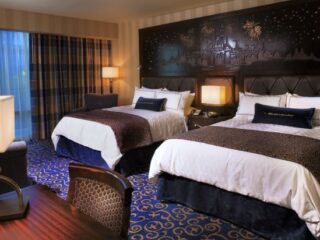 Disneyland Hotel Resort Benefits - Are They Worth It?
← Read Last Post 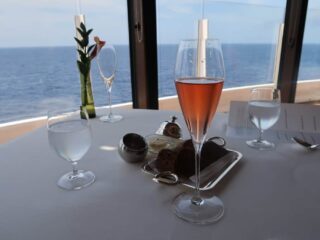 Disney Cruise Line - Are the Drinks Free?
Read Next Post →