How To Find Anna and Elsa at Walt Disney World

How do you find Anna and Elsa at Walt Disney World? If you have young princesses in your party, or anyone who simply has to see everything Frozen related, this guide will show you how to find your favorite characters.

Princess Anna and Queen Elsa are two of the most sought after characters in Disney World. You do need to do a little planning to maximize your chances of seeing them without standing in line for a huge amount of time. In our guide we include tips of how to make sure that you have the best chance of seeing Anna and Elsa.

Your best opportunities to see Anna and Elsa are in Disney’s Epcot. The Norway Pavilion in Epcot World Showcase is their home base.

This attraction has proved to be so popular that the Norway Pavilion opens at 9 am. when the rest of World Showcase doesn’t open until 11 am.

Frozen Ever After is a boat ride which has been adapted and re themed from the original Norway attraction Maelstrom.

When Frozen Ever After first opened, waits of 300 minutes were not unheard of. Yes, you saw it right. Many guests spent up to five hours in line waiting for this attraction. Fortunately this situation has calmed down a little, but at busy times you will still see waits of two hours for this very popular attraction.

There are tactics that you can use so that you can cut down your time spent waiting in line for Frozen Ever After.

Get a FastPass+ for Frozen Ever After

This is by far the best tactic to cut down your wait time in line for Frozen Ever After. This is without doubt an essential part of your Epcot strategy if you want to see this attraction.

Without any question, if you want to see the Frozen ride you must choose the FastPass+ for this attraction. The lines for Frozen far exceed Test Track and Soarin’ so the decision is an easy one.

If you possibly can, we suggest getting a Fast Pass for some time between noon and 2pm if you plan on arriving early to Epcot. This will give you a chance to experience Test Track and Soarin’ prior to entering the World Showcase part of Epcot.

As you will have guessed FastPass+ for Frozen Ever After is a much sought after ticket. Make sure that you get online to get one as soon as you possibly can.

The advantage of a FastPass+ is also that if the ride breaks down it will be valid for later in the day. Frozen Ever After does experience quite a lot of down time. The ride system is 30 years old and it experiences shut downs, so making the wait times even worse.

Strategies for Getting to the Norway Pavilion Early

Your aim is to get into the park as early as you possibly can. If the park opens officially at 9 am you need to be arriving at the park at least 45 minutes prior to that opening time.

Be aware that pretty much everyone in that early rope drop crowd will also be heading to Frozen Ever After. Lines soon build up if you are not in the early part of that crowd and make your way briskly over to the Norway Pavilion.

You can also use the International Gateway Entrance to Epcot. The reason for this is simple. It will open at the same time as the main entrance rope drop, but there will be less people there. Not only does this mean that you will potentially get into the park slightly earlier as you will be in a less crowded line, but also that you will have to dodge less people actually walking to the attraction!

You could also get a breakfast reservation for Princess Storybook Dining at Akershus. The restaurant opens at 8 am. so if you can get a reservation for this time you can still get out and in line for the attraction prior to rope drop. If you decide to do this it does mean that breakfast could be rather rushed. You will have to decide whether spending the money on breakfast and potentially having to cut short the experience is worth it. Many guests do use this tactic and the servers in Akershus are very used to the request that you want to be out of the restaurant quickly!

More Tips for Frozen Ever After

If you don’t make it early, you could go late. So long as the park is still open you can get in the line. If you are willing to sacrifice watching Epcot Illuminations you can get in the Frozen Ever After line as late as 8.59 pm. and you will still be allowed to ride.

If you are a Disney Hotel Resort Guest you could visit during Extra Magic Hours. Usually the morning hour will still be full of guests heading for the Frozen line, but evening times are slower. You have an additional 3 hours in the park. Usually crowds are much lighter during these Extra Magic Hours so this can be a great opportunity to experience the Frozen ride.

Photo Credit
Frozen Ever After is a great attraction, but the only way to meet and greet Anna and Elsa in Walt Disney World is to go to Royal Summerhus. This is also located in Norway Pavilion.

FastPass+ is not available for Royal Summerhus. There are wait times of up to 60 minutes at busy times, but you can minimize this if you visit at off peak times. These tend to be early in the morning and late in the evening. Times to aim for include 5 pm. to 7 pm and just before Illuminations starts.

Anna and Elsa are in the same building, but they do not greet people together. It is unfortunate that you can’t get a picture with them together.

We do wish that there were more opportunities to actually meet Anna and Elsa, but unfortunately this is the only place that you can meet them in Disney World.

Anna and Elsa at Magic Kingdom

Anna and Elsa appear in the Festival of Festival of Fantasy Parade. This is one of the best Magic Kingdom Parades in recent years.

You can also see Anna and Elsa in the show Mickey’s Royal Friendship Faire which is performed a number of times each day in front of the Cinderella Castle.

The Holidays give some more opportunities to catch sight of Anna and Elsa. Frozen Holiday Wish is a show which runs during the Holiday Season only. This show is performed twice daily and takes place in front of the Cinderella Castle.

You can see Anna and Elsa in Hollywood Studios in For the First Time In Forever: A Frozen Sing-Along Celebration. This is at the Hyperion Theater. If you love Frozen you will enjoy the opportunity to sing along with all the songs. There is nothing quite like being in a room full of people singing Let it Go!

Anna and Elsa appear briefly in person during the show. However, there is no opportunity to meet and greet.

Anna and Elsa in Disney World

Photo Credit
Given the huge popularity of Anna and Elsa there are few opportunities to see them in Disney World. The new Frozen Ever After ride is a welcome addition to Epcot. The lines have reduced somewhat. However, you can still encounter unacceptable wait times for Frozen Ever After. Using our tactics will help to reduce your time spent in line considerably.

Have you waited in line for Frozen Ever After? What was your opinion of the ride? 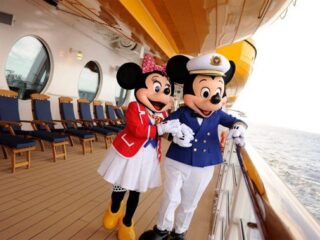 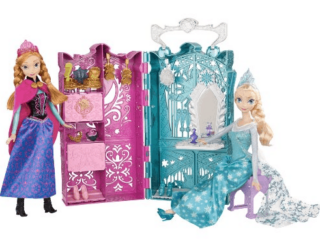