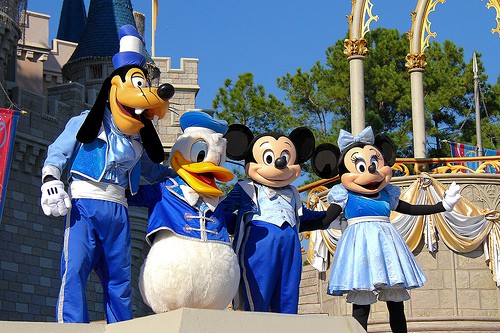 Mickey and Minnie Mouse made their movie debut on 18th November 1928 – so they are both 80 years old today!  Still looking good, although they have both seen a lot of changes through the years.

Mickey Mouse was created by Walt Disney and Ub Iwerks. Disney had been having a difficult time as his previous successful character Oswald the Rabbit was owned by Universal Studios.  Walt Disney learned by this experience that he must always own the rights to his creations.

Walt Disney described how the character of Mickey Mouse emerged and how influential he was in creating the ideas for Disney’s future enterprises:

“We felt that the public, and especially the children, like animals that are cute and little. I think we are rather indebted to Charlie Chaplin for the idea. We wanted something appealing, and we thought of a tiny bit of a mouse that would have something of the wistfulness of Chaplin a little fellow trying to do the best he could. When people laugh at Mickey Mouse, because he is so human; and that is the secret of his popularity. I only hope that we don’t lose sight of one thing: that it was all started by a mouse”.