Moving on from the best Disney attractions, it’s now time to look at some of there worst.

The reason this list only has ten spots instead of twenty, like in my Best Disney Attractions article, is I honestly couldn’t think of many attractions that were bad. Most of the attractions at Disney are great, and there are only a handful that I would describe as terrible.

The reason I’m making this list isn’t to trash on really bad Disney attractions, but to provide people a list of attractions to not put on your must-do list next time they visit a Disney Park!

Like the other list, I’m only listing Disney attractions in the United States as I haven’t been to any of the other parks yet. Once I do, I’ll be sure to include attractions from those parks on a “Worst Disney Attractions Around The World List.”

For one thing, it shouldn’t be in Tomorrowland. It’s themed around a racetrack, which isn’t in anyway futuristic.

Not only that, but the theming is boring. There isn’t anything to look at and it all looks very plain and generic.

The track layout is boring too. Around 25% of the duration of the attraction is going around that big curve at the beginning, and it’s only a three minute attraction…

Autopia at Disneyland is a little better, hence why I didn’t put it in the same spot. The theming fits in better with Tomorrowland, there’s a lot more to look at, the setting is much nicer, and the track has a lot of variety.

One problem many guests have with California Adventure is many of the attractions are just glorified carnival rides. One of the worst of these is the Golden Zephyr.

At least the other carnival rides have a little bit of theming, like Inside Out – Emotional Whirlwind or Goofy’s Sky School. This has pretty much nothing. It in no way feels Disney.

On top of that, it’s the most boring out of all the carnival rides at California Adventure besides Emotional Whirlwind. All you do is fly around in a circle. And feel just that little bit unsafe…

However, what brings the attraction down for me is it’s really uncomfortable. Unlike Dumbo the Flying Elephant or Magic Carpets of Aladdin, the ride vehicle doesn’t stay flat. Instead, it tilts if you’re close to ground or up high, meaning you’re leaning against the side of the rocket, making the experience very uncomfortable.

Plus, the rockets are really small and can be a little diffcult to get into as you have to lay your legs flat.

Before the 2017 refurbishment, I really liked the Green Team. It wasn’t much, and I wouldn’t wait more than fifteen minutes for it, but it was still a fun experience.

However, I really don’t like the new version of the ride. Now, you’re just orbiting the Earth and there isn’t much more to it than that. In the original, you orbit the Earth, orbit the moon, get caught it in an asteroid field, fly through tight canyons, and then nearly fall off of a cliff.

All you do in this version is go on an uneventful orbit around the Earth and then navigate through a thunderstorm. That’s it. It’s pretty dull.

Though they didn’t change the ride video, some say the Orange Team is an underwhelming experience as well and doesn’t offer much in terms of thrills. I might have included Orange Team on this list too, but I’ve never been on it, as it doesn’t look like the kind of thing I’d enjoy.

The trackless technology is amazing, but the experience is very underwhelming.

In no way is it fun. You just move around for a few minutes, and that’s it. I’m not sure even kids would like it.

Another carnival attraction at California Adventure. There’s barely any theming – it only has a few billboards here and there. It’s also really ugly. The tracks are rusty and it feels like you’re in a construction site.

On top of that, it’s one of the roughest roller coasters I’ve ever been on. The bends are too tight, the brakes are too harsh, and it’s so bumpy that it is in fact painful.

I also don’t like that some of the scaffolding is close to the track, because there are some times where it feels like you’re going to hit your head on a piece of metal. Of course, you won’t – it’s a perfectly safe attraction. However, it certainly doesn’t FEEL safe…

It looks like something you’d find at a Chuck E. Cheese.

I think the idea of the show is it’s supposed to be cute, but the bear animatronics look really creepy. They remind of those animatronics from Five Nights At Freddy’s.

Maybe if I liked country music I’d enjoy this more, but for me, it’s too creepy!

The tone of this show is really bizarre. One minute the bugs are singing and dancing, then in the next, the villain is attacking you (or at least, it feels like their attacking you) with a fly swatter and a can of bug spray.

This show is much too intense to be at Disney, especially given the fact that A Bug’s Life isn’t a scary movie, meaning people aren’t expecting such an intense experience.

It’s not the fun kind of scary either. I like getting scared, but for some reason, the scary moments in this feel mean-spirited. I’ve heard lots of stories of parents having to take their children out of the theater because they got scared and started crying.

The spider scene is particularly scary. It’s a shock when the big spiders drop down from the ceiling and they get really close to the audience. Even though I don’t have a fear of spiders, I still find the spider scene a little too intense.

I’m not saying Disney shouldn’t create scary attractions – in fact, Tower of Terror and The Haunted Mansion are the best rides at the parks. However, maybe this is taking it a bit too far…

2. Journey Into Imagination With Figment (EPCOT)

Journey Into Imagination With Figment is really bizarre. A ride based on imagination is a brilliant idea and has so many story-telling opportunites.

However, the story they picked isn’t – well… imaginative. I’d like to see an exhibit at a science museum on how senses trigger the imagination, but it’s not a very interesting concept to base an entire ride on.

Wouldn’t it be cooler if this ride was about the endless possibilties of imagination? About how it can be used to create paintings, buildings, stories, etc.? If I’d never been to Epcot before and someone told me there was a ride about imagination, I’d imagine (hehe) a ride where you’d go to far-out worlds and see things you’d never see in daily life, but in your imagination.

The story they picked isn’t interesting. It seems like a missed opputunity.

The sets aren’t very exciting, the ride system isn’t unique, and Figment is really, really annoying. There isn’t anything inspiring or indeed imaginative about this attraction.

I can’t stand this one. I’ve been to Disneyland hundred and hundreds of times, and I think I’ve only been on this ride four times.

Like the Country Bear Jamoree, the characters are too creepy, even though I think they’re supposed to be cute. They look like something from a freaky circus in a horror movie. Whenever I go on this, I feel like I’ve dropped into a nightmare.

On top of that, the ride is really rough and the story is really confusing. When I ride it, I have absolutely no idea what’s going on in the story. Definitely skip this one.

Which do you think is the worst Disney attraction? 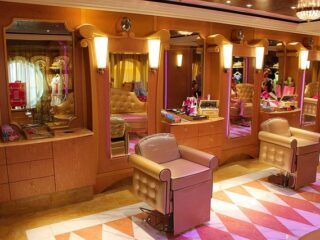