Disney offers some of the best theme park attractions in the world. Thrills, ground-breaking effects, breath-taking scenery – Disney attractions have it all.

Here is a list of the 20 best Disney park attractions in both Disneyland and Disney World.

Keep in mind, this is just my personal opinion, and this list isn’t supposed to be taken objectively.

Also, I’ve never been to any of the Disney parks outside the US, so I’m not going to include any attractions from those parks. I hope to go soon though!

This is a perfect roller coaster. It’s fast, long, and has some sweet air-time moments.

On top of that, the roller coaster is great for families. Children will appreciate that it’s not too intense, yet it’s not so tame that adults would find it boring.

The scenery created for this attraction is stunning. It looks like a real mountain!

I had an absolute blast when I went on this ride, probably because I love getting scared.

I don’t usually scream on rides, but when that carnotaurus jumped out from behind that bush I did let out a loud yelp.

When it first opened, it was called Countdown To Extinction and was even more intense than it is now. In one of the encounters with the carnotaurus, they would play audio of the carnotaurus chasing you as you drove away.

I’m glad they took that out, because it was a little too scary for kids, but I do wish I experienced that once because that sounds like so much fun!

The special effects on this Frozen Ever After ride are amazing! The animatronics are so life-like! My jaw dropped when I first saw the Olaf animatronic at the start of the ride.

The only thing is I’m not a huge fan of Frozen, so I don’t enjoy the setting or the story that much.

Still, the effects are fantastic.

A side-by-side race through the desert – what a great idea for an attraction!

The indoor parts of Radiator Springs Racers are great too. It’s really well themed and it has some very unique animatronics.

One of my favorite kinds of attractions is the shooter ride, like Men In Black: Alien Attack at Universal Studios Orlando or Buzz Lightyear Space Ranger Spin, so I really love this one.

I don’t usually like 4D attractions, but here, the 4D elements work really well. I like it how when you break the plate next to the tank in the Green Army men section you get a puff of air in your face simulating the missile flying past your head. It makes the experience much more fun and engaging.

This attraction does a great job of replicating the feeling of flight.

It’s so relaxing gliding over the great landmarks of the world like the Taj Mahall or the Eiffel Tower.

This might sound a little weird, but my favorite part of the attraction is when they blast those really nice scents as you fly over the different landscapes. They smell really good! It’s like walking into Bath & Body Works.

The theming in this ride is amazing. The queue does a brilliant job of telling the story and establishing a very ominous atmosphere.

This Hollywood Tower of Terror ride is also home to some of the creepiest moments out of any of the Disney parks rides. The part where the ghosts of the family appear at the end of the hallway gives me the spooks every time I ride it.

Like Frozen Ever After, the effects in this ride are astounding. It does a great job of completly immersing you into the cartoon world of Mickey Mouse.

I don’t want to go into too much into detail, as not many people got the chance to go on this attraction since Disney World closed a few weeks after it opened. All I’ll say is it’s a must-do when you go to Hollywood Studios and it stands as one of the most impressive theme park attactions to date.

The only reason it’s not higher on this list is that like Frozen Ever After I’m not very engaged in the story or characters. I’ve never seen the new Mickey Mouse shorts this ride is based on, so I’m not very enthusiastic about the story.

Finally, Star Wars fans have the chance to pilot the one and only Millenium Falcon. Though I’m not very good at it, piloting this thing is so much fun. I also love wandering around the ship and seeing all the easter eggs from the movies.

My only complaint is I wish they had different missions you could take part in. However, there are rumors that they’re going to add more missions to the ride, so fingers crossed that those rumors are true!

This attraction is perfectly suited for me – I love roller coasters and Aerosmith.

Hearing “Sweet Emotion” blast in your ears while you zoom through the catapult launch at the beginning of the ride is an out of this world experience. There aren’t many roller coasters that are better than this.

10. Pirates Of The Caribbean (Disneyland/Magic Kingdom)

It’s very immersive and at times breathtaking. I think my favorite scene is when you come out of the caves and you’re caught in the battle between the pirates and the town soldiers. It feels like you’ve been dropped into an action movie.

Kilimanjaro Safaris is a must-do at Animal Kingdom, especially if you’re an animal lover. It’s the closest thing you can get to a real safari expedition.

What’s impressive about this attraction is it’s bigger than the entire Magic Kingdom park, coming in at 110 acres. It is a truly unique experience.

For a detailed look at at this attraction you can see this article at Kilimanjaro Safaris Guide.

This is one of my favorite roller coasters in the world. Usually, Disney roller coasters aren’t designed to scare you, but this one sure is with its lift hill that’s over 100 feet in the air and backward plunge in the dark.

It’s really, really fast too with its max speed coming in at 50 mph. It’s an adrenaline-filled ride that’s sure to excite thrill-seekers.

This ride truly makes you feel like you’re going on an action-packed adventure. I love zooming through the temple narrowly avoiding all the mummies, snakes, and other perilous traps.

Then it all leads to a killer climax where you dive underneath the boulder from the first movie while the Indiana Jones theme blasts in your ears. Not only is this one of the best Disney attractions, but it might be one of the best theme park attractions in the world.

You couldn’t ask for a better horror attraction. I love the gothic atmosphere with its candlelit rooms, spooky soundtrack, and creepy decor.

The effects in this ride are amazing. I’ve been on it thousands and thousands of times and I still can’t figure out how they do the dancing ghost effect in the ballroom.

As for which version is better, the version Magic Kingdom beats Disneyland’s by a landslide. It’s longer, the effects work better, and the queue is much more interesting. The only two things the Disneyland version has going for it is the Hatbox Ghost and, in my opinion, the mansion design is much better.

Lots of people say this is their favorite Disney attraction, and for good reason.

Putting a roller coaster in the dark is a brilliant idea.

What makes it even better is the fantastic soundtrack as well as the fans blowing in your face which makes it feel like you’re zooming really, really fast through space.

You may have noticed that above I only put in “Disneyland” for the location of this attraction and didn’t include the Magic Kingdom. This is because I don’t like the one in Magic Kingdom that much. It’s bumpy, the effects don’t work that well, and it’s lacking the soundtrack from the Disneyland version.

For one thing, the exterior is amazing. It’s incredible that they managed to fit a dark ride into a sphere.

I really like the concept of this ride – that is, a journey through history that takes a look at the development of communication over the years, going from Stone Age cave paintings all the way to the internet.

It’s also home to one of my favorite scenes out of all the Disney rides, which is at the end when you’re looking down at planet Earth from space.

It’s not the most impressive or innovative attraction on this list, but it’s definitely the most fun.

I adore everything about this ride. The music, the air-time, the action – it’s all great.

It’s one of the few theme park attractions that makes me laugh. Rocket’s line when the doors open to a view of Disneyland is absolutely hilarious.

Take Soarin’, times it by 100, then you’ve got Flight Of Passage.

I’m not a huge fan of Avatar, but I still love this ride. The simulator is very realistic and it really feels like you’re flying.

Going on this for the first time was one of the most exhilirating experiences of my life.

It’s pretty hard to beat this one. It is the absolute peak of what a theme park attraction can be.

No matter where you look, the immersion never breaks, unlike other attractions where you can see the screen cut off or the lights in the ceiling.

The sheer size of the attraction is enough to put it on top of this list. The AT-AT scene is jaw-dropping!

A perfect ride for Star Wars fan, and quite possibly the best theme park attraction in the entire world.

Which is your favorite Disney park attraction? Leave a comment to let me know. 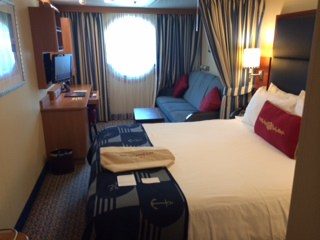 Disney Fantasy Oceanview Stateroom - Is It A Good Choice?
Read Next Post →