Can’t find what to watch next on Disney Plus? Look no further! Here is a list of great shorts, documentaries, shows, and movies to watch on your next tv night.

We’re not going to list the popular movies, shows, etc. like Frozen or Hamilton (even though you really should watch these too). Instead, we’ll look at some of the hidden gems on Disney Plus.

You might never have seen these on the catalogue, or ones that might not look so great but in actuality are very entertaining.

The Boys – The Sherman Brothers Story

Ever wondered who was behind some of the most iconic Disney songs like Feed The Birds (Tuppence A Bag), It’s A Small World, Winnie The Pooh, The Bare Necessities, The Tiki, Tiki, Tiki Room?

Those are just a small percentage of the Sherman brothers’ massive catalog of Disney songs and the story behind those songs as well as their composers are told in this 100-minute documentary.

It’s amazing watching the two brothers, Robert B. Sherman and Richard M. Sherman, coming up with those songs. They go through a trial and error process of changing the lyrics, rhythym, and chords until they finally hit gold.

What’s interesting is that while the Shermans brothers could create great songs together, they didn’t actually get along. The documentary showcases some of the ups and downs of the relationship, even showing some bitter arguments they had as they wrote some of the songs.

If you love Disney history and music, this documentary is perfect for you.

This might have to be one of darkest stories Pixar has ever created. It’s a short that centers around a dog being abused by their owner. You never actually see the owner hurt the dog, but you do see the dog bleeding and whining after they were attacked.

I was shocked at how gritty and dark this short was – I never though Pixar would go this far!

Don’t worry though, there are lots of cute and positive moments to balance the darker scenes. Overall, it has a positive message about friendship and is a very heart-warming story besides the some of the dark moments.

The art-style is beautiful as well. They somehow managed to turn a gloomy trash-filled backyard into an artistic masterpiece.

Something else that’s unique about this Pixar short is it’s completely hand-drawn – no 3D animation anywhere.

Going from a Pixar short that’s dark and gritty to the more traditional comedic shorts the studio is well know for, Partysaurus Rex is guaranteed to get a laugh out of you.

If you liked Toy Story Toons – Hawaiian Vacation, you’ll love this short too.

The story revolves around Rex starting a party with Bonnie’s bath toys. Things get out of hand though when the water in the bath gets higher and higher, and Rex has to try to keep it under control before it overflows.

I can’t give much more description than this, otherwise I’d spoil it, but all I’ll say is you’ll get a good laugh out of it!

Based on the true story of the first ever Jamaican bobsled team to compete in the Olympics.

While it can be predictable at times, this is a feel-good sports movie that any age-group can enjoy. Even if you don’t like sports you’ll like it. Take it from me – I thought this movie was a lot of fun, even though I haven’t played any sport in about 12 years, unless you count Wii Sports!

One of my favorite parts of the movie is the final race at the end. I won’t spoil anything, but the ending doesn’t turn out the way you think it will. It took me by surprise and found the scene very inspiring.

Another highlight is John Candy as the coach. He was a great actor and I really like the backstory they give the character.

Empire Of Dreams: The Story Of The Star Wars Trilogy

If you’re Star Wars fan or are into filmmaking, this documentary is a perfect for you.

This is a two-and-a-half hour documentary on the making of the original Star Wars trilogy – A New Hope, Empire Strikes Back and Return of the Jedi.

It shows you everything from on-set footage, the making of the costumes, construction of the sets, scoring sessions with John Williams, tons and tons of fun facts about the making of the movies, Ben Burtt working on the iconic sounds from the trilogy, and much, much more.

The two-and-a-half hours fly by – this is one of my favorite documentaries on Disney Plus.

This is the one that was made in the early 2000s which starred Jamie Lee Curtis and Lindsay Lohan. A mother and daughter who are constantly arguing end up switching bodies and have to live the other’s daily life.

For some reason, I always assumed Freaky Friday was like one of those really cheesy Disney Channel Original movies, so I wasn’t expecting much going in.

To my surprise though, it turned out to a hilarious, well-written heartwarming movie. The jokes were all really funny, especially the one at the end where the mother has to play electric guitar live on stage in front of a crowd of people having had no prior experience playing the instrument.

And again, it’s really heartwarming – I won’t spoil what happens, but there’s a scene when the daughter goes to her brother’s school which had me going “Awwwwww…”

A Set Of Simpsons Episodes

If you’re having a hard time picking which Simpsons episode to watch out of the hundreds and hundreds of episodes available, here is a list of some great ones for you to enjoy.

This episode takes place about a decade into the future when Lisa is getting married to her first husband. Not only is it hilarious, but it’s also one of the most heartfelt episodes to date. There are some moments that even make you tear up a little.

After comparing themselves to the better and much less dysfunctional familes at Mr. Burns’ company picnic, the Simpsons decide to attend family therapy.

This is a personal favorite of mine. I love the bizarre methods used in the therapy sessions as well as some of the jokes about the “perfect” families.

After Homer grows his hair back, he gains a huge sense of confidence and gets a huge promotion at his workplace.

The highlight of this episode is Carl, Homer’s secretary who would sacrifice anything to seem him succeed. I love it how there isn’t any reason why Carl should be so generous to Homer, but he does it anyway.

I also love the slightly corrupt health insurance agent who gives Homer the drug which grows his hair back – he’s hilarious.

This episode is about Homer and Marge telling the story of Lisa’s first word to Bart and Lisa.

Like Lisa’s Wedding, this episode has lots of heartwarming scenes, especially in the very last scene, which I won’t spoil here.

After realizing how much happier she is there, Lisa moves to Canada, much to Marge’s dismay.

This is the series that ran on ABC in 2015. It was cancelled after only one season much to my and many other’s disappointment.

This show is basically a Muppets version of The Office. It has the same style as well as a similar office setting.

The series is absolutely hilarious. It’s debatably one of the best Muppet movies or shows created so far.

The humor is surprisingly very adult. Of course, it’s all family-friendly, but there are lots of jokes that are targted towards adults.

One of the best lines in the show is when Kermit’s nephew says, “Ya know, I understand why my parents aren’t together – my mom likes quiet nights in while my dad likes my teacher.” There are lots of adult jokes like that scattered throughout the series, making it the all the more hilarious.

What are you watching on Disney Plus? If you haven’t yet signed up for Disney Plus it really is a great deal with a huge variety of things to watch. You can get the details at Disney + 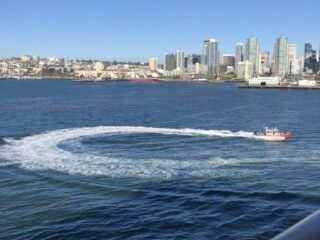 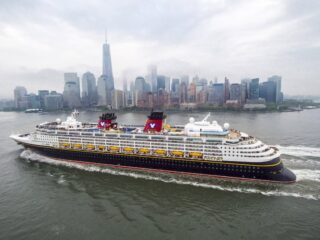