It certainly isn’t the longest, the fastest, or the latest technology.

However, it remains one of the most popular attractions in Walt Disney World. This roller coaster in the dark has been a must-experience attraction at Disney World for over 40 years.

Now all of the Disney parks worldwide have their own. The Orlando Space Mountain was refurbished in 2009 at an estimated cost of $12.3 million.

Walt Disney himself had the idea for the original concept of the Space Mountain ride. He wanted a new futuristic ride to be a major attraction for the Disneyland Tomorrowland renovation.

The attraction concept was originally named Space Port but later changed to Space Mountain. With the opening of Disney World Space Mountain, the tradition of the Disney Mountains became firmly established (the first being The Matterhorn Ride in Disneyland).

Following the death of Walt Disney in 1966 the designs were put on hold for Disneyland, but the ideas resurfaced in the early 1970s when Imagineers were looking for a thrill ride for the new Disney World which opened in 1971.

The outside of Space Mountain is an imposing 183 feet high and 300 feet in diameter. You can catch a glimpse of it when you approach the Magic Kingdom by boat or monorail.

Space Mountain is definitely one of those instantly recognizable Disney landmarks.

Lines for Space Mountain are pretty much always long. There is a Fast Pass so you should use that if you can. If you don’t mind being separated from the rest of your party the Single Rider Line is also a good option.

There is a height requirement of 44″ and riders must be at least age 7.

There are 2 tracks – Alpha and Omega. They both give exactly the same ride experience but the Omega track is 10 feet shorter than Alpha, simply because the ride design means they cross over each other.

Guests will board a 6 person space rocket. Riders sit in single file one in front of the other. The total ride time for Disney World Space Mountain is 2 minutes and 47 seconds.

The maximum speed which Space Mountain reaches is a fairly sedate 28 miles an hour. Somehow it manages to feel much faster than that. The speed varies slightly according to the weight load of each ride vehicle and the temperature of the vehicle and tracks.

The longer the ride has been running during the day the faster it will go, but only by a small amount. The longest drop is 35 feet.

You can actually go inside Space Mountain without experiencing the ride if you board the Tomorrowland Transit Authority. On a couple of occasions, I have been riding this when the lights have been turned on in Space Mountain.

From here you get a unique view and see that the ride really isn’t that big or impressive. It is the amazing theming which makes Space Mountain one of the best Walt Disney World rides.

The lighting and sound effects are what make the Space Mountain ride so unique. Space Mountain is a roller coaster in the dark so it relies on strobe lighting effects and carefully synchronized music to create a unique ride experience.

This was all updated as part of the 2009 refurbishment. Space Mountain has ‘Starry-O-Phonic Sound’ which uses 60 speakers installed on the sides of the track. Sound effects and music are timed to play as each train passes.

The soundtrack which is unique to the Magic Kingdom Space Mountain ride was written by composer Mike Brassell.

Is Space Mountain Disney World one of your favorite rides?

All images courtesy of expressmonorail 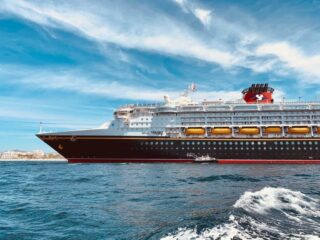 What is the Shortest Disney Cruise?
← Read Last Post 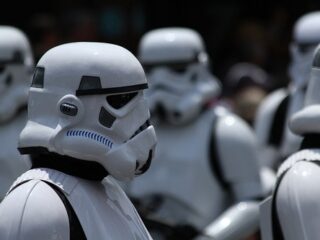 I think that the theme of dark, outer space is unique and a big selling point for Space Mountain. The roller coaster itself isn't all that exciting - but the environment around it is.