If you are looking for a quick bite to eat in Disney’s Magic Kingdom there is certainly no shortage of Quick Service restaurants. You have 24 Counter Service Restaurants to choose from in Magic Kingdom.

But which is the best Quick Service in Magic Kingdom?

The Magic Kingdom at Walt Disney World has a lot of fast food. You won’t go hungry, but you also most likely won’t leave the park thinking that you have had a magical dining experience either.

There are a smattering of table service restaurants, but by far the biggest choice is Magic Kingdom Counter Service.

Magic Kingdom has a lot of those window and counter service locations selling standard fried park fare. Okay, not all of it is fried, but you get the point.

Chicken nuggets and churros are ubiquitous at Disney. But there are some surprisingly unique and great-tasting food options that are especially refreshing in this land of turkey legs and ice cream bars.

Some Magic Kingdom fast food is much better than you would ever expect. So it’s worth knowing where to find these places.

There are some hidden gems but they are pretty well hidden! Here we help you find them.

All prices and menus are correct in August 2022.

What are the Magic Kingdom Quick Service Restaurants?

Whilst there may be plenty of places to choose to eat, you will see some repetition of things offered.

Magic Kingdom is not known for its fabulous food, and whilst there have been some improvements over the years, this park does not offer the diversity of choices of the other Disney theme parks.

However, if you are looking for a fast food fix at Magic Kingdom, there are some places that stand out from the rest.

Columbia Harbor House is by far my personal favorite. It leans a little heavier on seafood than some people might like, but there are other options.

Plus, if you do like seafood, you won’t find another Magic Kingdom fast food restaurant that offers lobster rolls or shrimp.

The lobster roll is a great choice and at $16.99 is reasonable for a Disney theme park.

The Trio Platter has something to appeal to most guests with a Combination of Fried Shrimp, Chicken Strips, and Battered Fish served with Hush Puppies and a choice of Sides for $14.29.

The Doom Burger is a Plant-based Crab Cake Sandwich topped with Red Onion and Cabbage Slaw served with French Fries for $12.99

The Spoon for One More is a really good value. This is a delicious Clam Chowder in a Sourdough Bowl for $7.49. If you don’t want the bread bowl it is $6.79

I love Columbia Harbor House because of its extensive theme. It’s a really wonderful low-key way to linger in the colonial setting of Liberty Square and enjoy the vibe over a relatively inexpensive meal.

The food is always reliably good as is the service, but my favorite thing is that people still haven’t figured out that you can go upstairs.

There is a whole dining area on the second floor that is usually mostly empty. It’s a great place to recharge midday so you can get out and tackle the crowds again.

One of the things that makes this Magic Kingdom Counter Service venue a cut above the rest is the extensive Fixins Bar. You can really make a meal out of your food here if you make use of the free items offered.

Why named Pecos Bill? He’s one of the many American Folk Heroes from the Disney animated Tall Tales of the 1950s.

This is a more popular restaurant than Columbia Harbor House because it has more mass appeal.

But it’s just as well-themed as Columbia Harbor House.

The large dining corridors include some additional layers of story. Artifacts by other folk legends who had supposedly patronized the establishment adorn the walls.

There are a lot of choices on the Pecos Bill menu. It has changed its menu recently to include not just a reasonably reliable choice of Cheeseburger variations, but also Mexican-based fare.

The Nachos are available with Pork, Chicken, or Beef for $11.49.

If you visit the park hungry in the morning and you need a quick breakfast, this is the place to stop, just to the left of Cinderella Castle.

This coffee shop is set up on the outskirts of Liberty Square. One of the reasons to eat here is that you get a great view of Cinderella Castle from the outdoor seating area.

The menu changes frequently, but they specialize in a few good items. This is the place to get your Waffle or Funnel Cake fix.

Sleepy Hollow may be best known for its fruit waffles, topped with Nutella and strawberries.

There are also special seasonal offerings. If you visit close to Halloween you may find a Constance Hatchaway Wedding Cake or The Doom Berry (a delicious blackberry flavor ginger beer).

When in Adventureland, there isn’t much by way of a legitimate Magic Kingdom fast food meal.

Outside of the table service Skippers’ Canteen, there is only one location, Tortuga Tavern where you can get a meal

However, if you are just looking for a snack then head to Sun Sunshine Tree Terrace is what you should be after.

Aloha Terrace is famous for Pineapple Dole Whip, but Sunshine Terrace is home to the iconic Orange Bird. Both are soft-serve locations that feature citrusy sweet desserts, but Sunshine Tree Terrace usually has a lot less of a line. Plus, it’s got a nice bench area near the Swiss Family Treehouse.

You really do have to experience the Dole Whip when you are in Magic Kingdom.

This place is always changing its menu to offer seasonal surprises, but it’s a great place to go for a quick bite such as Walt’s Chili Cheese Fries.

This location doesn’t have any indoor seating, but a good place to sit is the patio for Pecos Bill Tall Tale Inn and Cafe where you will find some covered outdoor seating.

Like many of the quick Service locations in Magic Kingdom the Golden Oak Outpost isn’t always available. However, in a pinch, you can always grab some corn dog nuggets and a slushy at Westward Ho. This cart stands along the waterfront near the Country Bear Jamboree.

Did you know that Golden Oak Outpost and Golden Oak residences at Disney World are named after the place where so many Disney films were shot outdoors?

Other Counter Service in Magic Kingdom

While I would love to round things out with a more balanced smattering of locations around the park, there just isn’t much to speak of on the Eastside.

Besides the lacking food availability and options, It’s my opinion that Tomorrowland is a fun place to pass through but not necessarily a place to pass any extra time in.

The restaurants I mentioned above have a way of enhancing the look and feel of the various themed surroundings. I don’t find that as much in Tomorrowland or Fantasyland.

The one possible exception would be Gaston’s Tavern. I only wish it had more seating and the ambiance falls a little bit flat since it’s supposed to be a tavern, but it’s more like a bakery.

You may also notice I left out Casey’s Corner. Casey’s Corner is a fine place for hot dogs and sometimes it really strikes the right cord if you are looking for that old-fashioned Main Street USA vibe.

However, the hotdogs are pre-made at another location and carted to the restaurant underground. That doesn’t make them bad, but if it’s not something special and you’re at Magic Kingdom, I suggest spending your money on something better.

There are so many fabulous places to eat in Walt Disney World. Whilst Magic Kingdom may be lacking in great quick-service dining locations, there are many other places in Disney World that have great food and dining experiences.

Here are some guides to food in Walt Disney World:

Where to Find the Best Breakfast in Epcot

Which are the Best and Worst Epcot Restaurants? 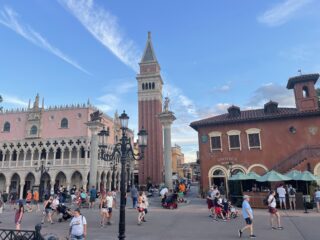 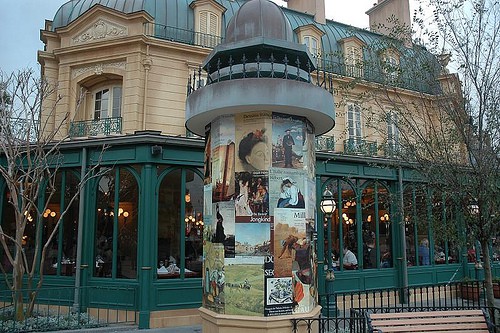