How many people can sail on the Disney Fantasy?

Disney Fantasy is the fourth ship to be built in the Disney Cruise Line fleet. She is the sister ship to the Disney Dream.

Both ships are collectively known as the Dream Class Ships.

The Disney Fantasy was built at the Meyer Werft at its shipyard in Papenburg, Germany at a cost of $950 million.

The Fantasy was formally Christened on March 1, 2012, in New York City. Her Godmother is Mariah Carey.

This was over 10 years before the Disney Wish Cruise Ship was launched.

The Disney Fantasy capacity is for 4,000 passengers. However, it is rare that she will ever sail at full capacity.

This is because to achieve full capacity every stateroom on the Fantasy would have to be full and have its maximum amount of passengers in each.

In addition to the passengers, there are 1,458 crew on board.

There are a total of 1,250 staterooms on the Disney Fantasy

How Fast Does the Disney Fantasy Sail?

The maximum speed of the Disney Fantasy is a maximum of 23.5 knots, although it is rare that she will sail at this top speed.

Other fun facts about Disney Fantasy are:

Are Disney Dream and Fantasy the Same?

Although the Disney Dream is slightly older than her sister, having been launched on January 26, 2011, she is pretty much identical.

The interior decor does vary as the Dream is Art Deco in style whilst the Disney Fantasy is Art Nouveau.

The “floor plan” is the same on both ships, but some of the bars and restaurants are named differently.

The major difference is in the itineraries that each Disney ship offers.

The Fantasy offers almost exclusively 7-night Western and Eastern Caribbean cruises and is based in Port Canaveral.

The Dream sails out of the port of Miami for some of the year in 2023. She has more varied itineraries than the Fantasy and sails a variety of Caribbean and Bahamian cruises.

The Disney Dream will sail to Europe in 2023.

Restaurants on the Disney Fantasy

There are three main dining restaurants on the Disney Fantasy:

Each Disney Fantasy restaurant has a capacity of 696 guests.

As there are two dinner seatings each day this means that the rotational dining restaurants can serve over 4,000 guests.

In addition to the main dining restaurants, there are two adults-only restaurants on the Disney Fantasy.

Remy is the smaller of the two restaurants and can seat 68 guests at full capacity.

How Much is a Cruise on the Disney Fantasy?

If you want to know what the Disney Fantasy cruise price is for 2023 we have a guide for you:

What Does a Disney Fantasy Cruise Cost?

Join Over 60,000 Others in Our Disney Cruise Group! 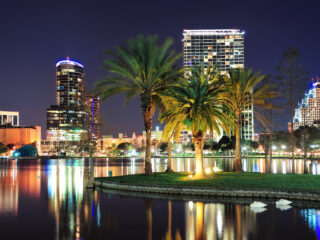