Star Wars Hotel Price – What You Need to Know

Disney has finally given some indication of how much the Disney Star Wars hotel will cost.

Here is the ultimate guide to what you can expect of the Disney Star Wars Hotel including the pricing and more details of what the cabins will actually be like.

Every great Disney park attraction and the hotel has a back story and concept and of course, the Star Wars Hotel is no exception.

It is being designed as a ship named the Halcyon. This is part of the Candrila Star Liner Fleet. So the concept is more like a ship than a hotel which is also why the rooms are called cabins.

Right now the Hotel is under construction at Disney’s Hollywood Studios in Orlando. I am sure that the concept will ultimately be extended to other Disney parks around the world once it has been truly tried and tested in Florida.

Maybe other hotels will be named differently but still, be part of the same Fleet.

Once the Disney Star Wars Hotel has proved to be a success in Walt Disney World, the concept will be heading to Disneyland and other Disney parks worldwide as well.

Because the concept of the Star Wars Hotel is that it is a ship, the rooms are called cabins.

There are 3 types of Star Wars Hotel cabins to choose from:

Most cabins will sleep up to 5 guests, but the Grand Captain Suite will sleep 8.

There will be a total of 100 cabins and suites. The blueprints which were seen were somewhat confusing as from this it looked as though there would only be a maximum of 64 cabins.

Each level seemed to show 32 cabins. Perhaps there are 3 levels, rather than the anticipated 2. This would give 96 Standard Cabins and the other 4 would be Suites.

The concept art for all the cabins looks stunning.

The Standard Cabin will sleep up to 5 passengers with a Queen Bed, 2 Bunk Beds, and a Wall Pull Down Bed.

The details say that all beds are suitable for adults as well as children.

Just like the concept of a Deluxe Family Verandah Stateroom on one of the Disney Ships.

Another thing which it seems that the Star Wars Hotel will borrow from the cruise ships is the virtual porthole technology. This can be used to create the effect that you are looking out into space.

If you want more room and only have 4 guests in your party, the Galaxy Class Suite is worth thinking about.

It has a double vanity bathroom, bar area, and 2 windows out to space!

If you have a group of up to 8 Star Wars fans friends (and really, who doesn’t) then maybe you can all pitch in to stay in the Galaxy Class Suite.

This is the ultimate Star Wars Hotel accommodation.

The Grand Captain Suite has two bedrooms and a living area with integrated seating.

This top-of-the-range Suite includes two bathrooms, a bar area, 3 windows with views out to space. It also has what is described as “a few extra Star Wars Surprises”.

There are a total of 2 Queen beds, 2 bunk beds, and 2 wall pull-down beds.

We still don’t know very much about the pricing of the Disney Star Wars Hotel, but Disney has just released some example pricing.

It seems to be priced very much like a Disney Cruise. The more guests you have in your cabin, the cheaper the per person price is.

What Will the Star Wars Hotel Cost?

Disney released some indication of what the Star Wars Hotel cost will be on August 4, 2021.

The actual price will depend on the time of year you visit, the itinerary, and the number of guests that you have in your party.

Here are some examples of the price of a Star Wars Hotel stay for voyage departure dates most weeknights between August 20, 2022, and September 17, 2022. Weekends are likely to be priced higher.

There has been no indication of how much the suites will cost.

If you are comparing these prices to a Disney Cruise, then the Star Wars Hotel is priced a lot higher. You can see comparison prices for the new Disney Wish.

Of course, a cruise and the Star Wars Hotel are very different experiences, even though the new Disney Wish has the Hyperspace Lounge.

The Star Wars Hotel is a dream come true for Star Wars fans.

However, many people have been comparing the type of experience as it is potentially all-inclusive for each.

What is Included in the Price?

The basic price will include:

As this is going to be a highly immersive experience you would expect that pretty much everything will be included.

However, I am sure that with a captive audience of guests who are already prepared to pay a very high rate per night, there will be more chances to spend more money!

I am sure that no matter what the cost, reservations are going to be difficult to get. Can you imagine how much demand there is for such an interactive and immersive Star Wars experience?

What do you think of the cost of a stay in the Star Wars Hotel? Will you be trying to book?

All images are Disney Concept Art 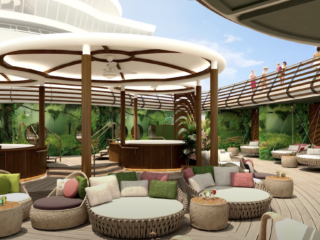