One of the most exciting parts of the Disney Wish reveal was the announcement that there will be a Star Wars Hyperspace Lounge on board.

This unique Star Wars bar on the Disney Wish Cruise Ship will offer an immersive experience which will take passengers on a journey through iconic Star Wars locations.

A dedicated Star Wars-themed space on the Disney Wish was perhaps always an inevitable step since the success of Galaxy’s Edge in Disney World and Disneyland.

Oga’s Cantina has been overwhelmingly popular and I am sure the Hyperspace Lounge on the Disney Wish will be one of the most popular adult spaces.

Hyperspace Lounge is another first for the Disney Wish. This Star Wars-themed area is the first one to be aimed at the adults on a Disney Cruise Ship.

However, those under 18’s needn’t worry that they will be excluded. Hyperspace Lounge will be open in the daytime for the young ones to indulge – in non-alcoholic beverages of course.

These are exciting times for fans of the franchise as we also have the opening of the Disney Star Wars Hotel to look forward to at Disney’s Hollywood Studios soon.

What We Know So Far About the Disney Wish Hyperspace Lounge

What details do we have about the Star Wars Bar on the Disney Wish?

When the Imagineers were trying to design this high-end lounge, they had many different options to choose from the Star Wars franchise. Industrial Light and Magic teamed up with the Disney Imagineers to create this innovative bar for the Disney Wish.

Danny Handke is a senior creative director of Walt Disney Imagineering and is the one who gets to be in charge of the design of Hyperspace Lounge. He is no stranger to bringing Star Wars to the Disney ships as he oversaw the Star Wars-themed areas on the Disney Fantasy and Disney Dream cruise ships.

Handke says of the new Disney Wish project on StarWars.com:

“We always talked about the fact that kids get to immerse themselves in Star Wars. But as a grownup, and a parent, I’m jealous that I don’t have my own space on the ship where I can immerse myself in Star Wars, since Star Wars is multi-generational. So we pitched the idea, ‘What if we did a lounge that’s for grownups only at night? It becomes an adult playground for the world of Star Wars.’ And everyone just loved that idea.”

They had a lot of choices to make. Would the bar be located on a specific planet, would it be the traditional cantina or would it be set somewhere unique and not yet discovered within the Star Wars world?

The answer seems obvious now – that the Hyperspace Lounge on the Disney Wish would be a spaceship. This opens up the possibilities for so many different scenes.

“We decided that since we’re on a cruise ship, it would be fun if the lounge is on a Star Wars ship. Around that time, we had The Last Jedi and Solo, and it was kind of the more refined side of Star Wars, like Canto Bight and Dryden Vos’ ship. We thought, ‘Boy, that’s really unique and different. You know, we have Oga’s Cantina at Star Wars: Galaxy’s Edge. What if we explored, as a nice juxtaposition to that, doing kind of a Dryden Vos yacht ship?’ We landed on that, doing something sophisticated, which also matches the design of the Disney Wish.”

The team at Industrial Light and Magic created the technology for the huge 7 pane screen behind the Hyperspace Lounge bar.

It might remind you of the Skyline Bar on the Disney Dream and Disney Fantasy. But the technology on the Wish is more than a decade in time ahead and in terms of innovation, light years ahead.

Guests of the Disney Wish Hyperspace Lounge will be able to see up to 40 different space ships from the Star Wars Galaxy. And of course, as it is hyperspace, these can all be in different time periods as well.

Every scene will have a storyline of its own. Make sure that you look out for Easter Eggs too.

There will be some very familiar spaceships. The Millennium Falcon will be there, as will the  Razor Crest from The Mandalorian.

Here is the full list of Star Wars spaceships you will see in Hyperspace Lounge on the Disney Wish.

Join The Best Disney Wish Group For Tips and Giveaways!

The Disney Wish Star Wars Bar experience is not just about the sights. The sound is very important too. Surround sound audio will add even more authenticity to the scene.

No details have yet been released about the drinks which will be available in Hyperspace Lounge. Apparently they will be completely new creations and not the same as those offered in Oga’s Cantina in Galaxy’s Edge.

I am guessing though that Blue Milk will most definitely be on the drinks menu.

If this is as popular as Oga’s Cantina at Galaxy’s Edge this might be a place that has to have a virtual queue! There is no word on the seating capacity of Hyperspace Lounge, but it will most certainly be one of the most sought after locations on the ship.

Want to know more about the Disney Wish Cruise Ship? This is the place to be to keep you up to date with everything Disney Wish!

One of the most important things you need to know is about your choice of staterooms on the Disney Wish. We have the following guides for you:

If you are thinking about sailing on the Disney Wish and booking Concierge you should read our Ultimate Guide to Disney Wish Concierge – Is it For You?

Join The Best Disney Wish Group For Tips and Giveaways! 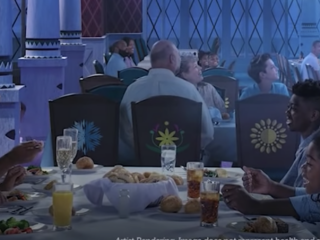 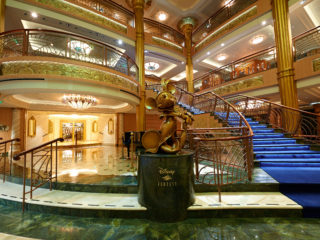