Which Disney World Park Has The Most Rides?

Disney World comprises a whopping 53 rides spread among its four mega theme parks. That number is super impressive, but keep in mind that some parks have more rides than others.

Plus, to make it more interesting, some parks tend to have more rides targeted toward a certain age group.

For example, Disney’s Hollywood Studios, surprisingly, doesn’t have many rides suited to young kids. Only three attractions have no height requirement.

First, let’s see which Disney park has the most rides:

The clear winner here is Magic Kingdom, which comes out with an impressive 23 rides. None of the other parks even have half that.

Here is a list of all of the Disney World park rides.

We expect that a new ride to replace Primeval Whirl will be announced soon, and Animal Kingdom’s ride total will go back up to 9.

However, we’ll dive deeper a bit deeper into each park and see which rides are better suited for a certain audience.

Below, we’ll have a look at this categorically, based on each age group. Needless to say, just because I say a ride is targeted toward a certain age group, doesn’t mean other age groups can’t enjoy it.

Which Disney Park Has The Most Rides For Adults?

The thing that’s great about Magic Kingdom is there are plenty of ride options for every member of the family.

Toddlers can enjoy rides like Dumbo or Prince Charming’s Regal Carousel, while older guests can enjoy some of the fan favorites like Splash Mountain or Space Mountain.

However, while Magic Kingdom has plenty of rides for adults, I think Hollywood Studios is a much better fit.

The attractions for adults are great at Magic Kingdom, but they don’t compare to the rides at Hollywood Studios such as Tower of Terror or Star Wars – Rise of the Resistance.

Animal Kingdom comes at a close second for me. Avatar – Flight of Passage and Expedition Everest are among the best attractions at Disney World.

This ultimately comes down to personal preference. I can see why someone would say Animal Kingdom has the best Disney rides for adults.

The only reason I prefer Hollywood Studios is the thrill rides are more intense.

Which Disney Park Has The Most Rides For Teens?

Again, this one is going to have to go to Hollywood Studios. Most of the thrill rides at Magic Kingdom are designed so the entire family can enjoy them, so none of them, besides maybe Space Mountain, are that intense.

In Hollywood Studios, you have high-adrenaline thrill rides like Tower of Terror and Rockin’ Roller Coaster. I’d say there aren’t any thrill rides as intense as those two.

Where is the Best Place to Stay in Disney World?

In fact, Rockin’ Roller Coaster is the only roller coaster to have an inversion in Disney World.

Epcot might be the worst for teens. Guardians of the Galaxy – Cosmic Rewind is a great roller coaster, but that’s pretty much the only great thrill ride there.

There are two other thrill rides, Mission: Space and Test Track, but neither is that exciting or thrilling.

Which Disney Park Has The Most Rides For Kids?

As you could probably see, Disney’s Magic Kingdom has the most rides for kids.

They have rides for toddlers like The Many Adventures Of Winnie The Pooh, and ones for older kids like Pirates of the Caribbean.

They also have plenty of thrill rides that are kid-friendly, like Seven Dwarfs Mine Train and Splash Mountain.

None of the other parks come close to the number of rides for kids.

Which Disney Park Has The Most Rides For Seniors?

If you’re a senior looking for a more low-key experience, Epcot is the park for you. Most of the rides are slow-moving and tame, like Living With The Land and Spaceship Earth. Plus, there are a lot of sit-down shows, like The American Adventure.

Magic Kingdom is also good for senior citizens. Most of the rides are slow-moving.

Which is the Best Disney Hotel for Toddlers? 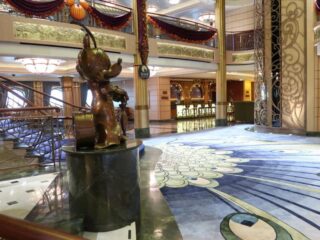