Will Disney Cruise to Australia – Is the Wonder Sailing to Sydney?

Could Disney Cruise Line Be Heading to Australia Soon? There are certainly some good reasons to think that the Disney Wonder could be on her way to Sydney Australia in Fall 2023.

There has been speculation about DCL sailing from Australia for some time. Rumors began as far back as 2019 but everything was put on hold for obvious reasons.

However, there are a number of indicators now that all add up to a definite maybe.

Let’s take a look at why many think that a Disney Cruise to Australia may become a reality sooner rather than later.

UPDATE – DISNEY WONDER WILL SAIL TO AUSTRALIA – ALL THE DETAILS!

This article was written prior to the announcement that the Disney Wonder will indeed be sailing to Australia!

Why Does Disney Want to Enter the Australian Cruise Market?

Australia is a huge untapped market for Disney. And a huge market equals revenue.

All cruise lines have taken a hit in recent years, and this is a big opportunity for DCL to enter what is likely to be a very lucrative market.

There is a big demand for Disney products and parks, but in order for people living in Australia to experience the magic of their theme parks or cruise ships, they have to travel.

And they have to travel a very long way.

If a Disney Cruise ship came to Australia it would serve a huge pent-up demand for the Disney experience.

According to a CLIA Economic Impact Report, 2018-19 cruise tourism was worth $5.2 billion a year to the Australian economy. It sustained more than 18,000 Australian jobs including travel agents, tour operators, transport workers, food and produce suppliers, farmers, entertainers, port workers, and technical support providers.

Disney is very well positioned to make a huge success in entering the Australian market.

JOIN OUR DISNEY CRUISE AUSTRALIA GROUP FOR TIPS AND GIVEAWAYS!

Another significant move is that Shop Disney has, since June 2022, become available in Australia. Another indicator that Disney is keen to make an impact in this market.

All of the Disney ships, the Magic, Dream, Fantasy, and Wish are now able to be booked up to the end of 2023.

There are also the ever-popular Disney Cruises from Europe including Mediterranean, Northern Europe and British Isles desitinations.

However, there was one ship missing from this line-up.

The last cruise itinerary scheduled for the Disney Wonder is an 8-night Alaskan cruise from Vancouver Canada. This means right now the Wonder will sail back to Vancouver on 19 September 2023 and it isn’t clear where she is headed next.

However, it does seem to make a lot of sense that she could be heading to Australia.

There are now five Disney cruise ships, with two more planned. By the end of the decade, Disney will have seven ships.

What is Disney Saying about Cruises in Australia and New Zealand?

Although Disney really isn’t giving much away about this possibility there was certainly a big hint from Disney’s Vice President of Marketing & Sales International Jeff van Langeveld who said:

“Australia and New Zealand are big cruise markets with a strong affinity for Disney, so naturally that’s going to be a big focus for us going forward.”

Another very significant sign is what Disney Cruise Line has been doing on a corporate level.

They also registered with the Australian Securities and Investments Commission

The Magical Cruise Company, Limited is the UK company through which DCL operates.

There was also the announcement that Disney would be an exhibitor at the Cruise360 Australasia Trade Show. This has to be a very strong sign of Disney’s intentions to enter that market

All of these moves combined give very strong support to the idea that Disney will be sailing Australian and New Zealand itineraries very soon.

Will Disney Sail from the Port of Sydney Australia?

There is another huge clue that Disney Wonder may very well be sailing from Sydney from October 2023.

If you look at the schedule for the Sydney Cruise port for October 2023 you can see that there is an “Unnamed Line” scheduled.

The first date this is seen is 27 October 2023 which is completely in line with the mystery ship being the Disney Wonder.

As you can see, many other cruise lines already have ships sailing from Sydney including Carnival, Royal Caribbean, Celebrity, and Princess.

The last entry that we can see at the moment for the “Unnamed Line” is 16 February 2024.

This could mean a number of things if the Disney Wonder is going to be sailing out of Sydney.

Firstly that the port “unnamed line” simply isn’t showing up yet.

Or that the Disney Wonder will initially spend a short time in Australia to test the market. There is already a huge demand for cruises to Hawaii so perhaps she will sail there on her way back to San Diego? This would leave time for some Mexico cruises before sailing to Alaska as she usually does.

The other alternative is that she will have a home port somewhere closer to Sydney and offer different itineraries to Australia and New Zealand.

If this is the case then it is likely that the Disney Magic would make a journey back through the Panama Canal to take over the Wonders’ old sailings from San Diego, California, and Vancouver Canada.

Want to Know More About the Disney Wonder?

The Disney Wonder was the second cruise ship to be launched in the Disney fleet.

If I am asked which is my favorite Disney Cruise Ship I always say the Wonder.

She may not have all the features of the Dream Class and now the new Disney Wish, but she is still a fabulous place to spend some time on the seven seas.

She is, with the Magic, the smaller of the Disney Cruise ships. This means that it is so easy to find your way around. But it doesn’t mean that you will be short on things to do.

The Disney Wonder has 875 staterooms to choose from ranging from inside staterooms to the highly sought-after Concierge Walt and Roy Disney Suites.

Here is the Ultimate Guide to Disney Wonder Staterooms to help you choose.

And of course, you will experience the unrivaled Broadway quality shows on board including a performance of Disney’s Frozen.

You will never go hungry on a Disney Cruise with a huge array of choices from quick snacks to fine dining.

Disney has a unique system for its main dining rooms which is called Rotational Dining. What this means is that you will “rotate” around the three main dining restaurants so that you get a chance to experience all of them at least once.

The other great thing about this is that your Servers will come with you! This gives them the chance to provide you with the very best service as they get to know you and your likes and dislikes.

The three restaurants in the Disney Wonder are:

You can find out all about them in our Disney Wonder Restaurant Guide which includes menus and pictures of the restaurants and the food.

There is also the adult-only dining venue Palo which is open for brunch on sea days and every day for dinner.

Disney may be known as a great choice for families, but it is also very popular with adults sailing without kids. There are plenty of areas on the ship which are exclusively for adults.

If you are thinking of sailing without kids we have a guide – Is a Disney Cruise Really Just for Kids?

If you want to get a detailed overall view of the Disney Wonder cruise ship we created the ultimate virtual tour for you.

The Ultimate Guide to the Disney Wonder

The Disney Wonder is a beautiful ship and is perfect to sail in Australia and New Zealand. I can’t wait for the announcement that seems pretty certain to be coming soon – I will definitely be booking.

Do you want to sail on a Disney Cruise from Australia? 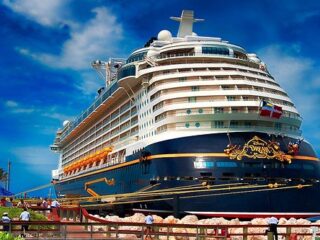 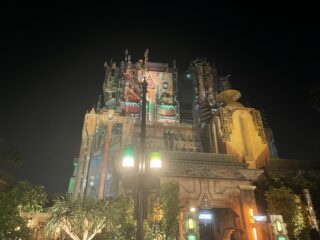 What is Rider Switch at Disneyland?
Read Next Post →

I am so on that