Disney Wish Cruise Ship – When Will it Launch?

The launch of the Disney Wish Cruise Ship is one of the most eagerly awaited events amongst Disney Cruise fans. As soon as they release the Disney Wish itinerary I am going to be booking!

However, will Disney Cruise Lines still launch the Disney Wish on time? Will it be delayed?

The latest news is that the Disney Wish will not launch in January 2022 as was originally expected.

“The shipyard we utilize for our cruise ships, Meyer Werft, was impacted and we encountered a delay. We are in negotiations and discussions with the shipyard to finalize dates. But, as soon as we have those, we’ll make an announcement when we expect the fifth ship, which is the first of the three, to be delivered. But, it is delayed from what we had originally anticipated.”

Not the news that any of us wanted to hear, but not unexpected either.

We will publish all news about when the Disney Wish will sail as soon as we hear it. This post is updated for February 2021.

When Will Disney Wish Launch?

The last time (before October 2021) we had any news from Disney as to when the Disney Wish will launch was back on August 25, 2019. The Official Disney Site says

The Disney Wish is scheduled for delivery in late 2021 and will set sail in January 2022. The vessel will join Disney Cruise Line’s award-winning fleet where guests experience the magic of Disney entertainment combined with the relaxation of tropical, sun-drenched beaches and the adventure of ocean cruising.

Now, unfortunately, we have heard officially that it will be delayed – but we still don’t know when the Disney Wish will be launched.

The latest statement is that the launch will be Summer 2022 – but this covers a wide range of dates probably from May until September 2022.

Even though the cruise industry is experiencing unprecedented challenges, Disney is still in huge demand.

Right now the demand for Disney cruises seems to remain as high as ever. With a huge and very loyal Disney Cruise fan base, it is highly likely that the Disney Wish would have no problems booking out many of the dates as soon as they are released.

So, in some ways, Disney may not want to delay. The Disney Wish needs to be launched to produce significant revenue – so maybe the early 2022 launch date will be perfect.

All images from Disney Cruise Line.

There is a lot of speculation, and we can all do that for as long as we want, but what are facts that we actually know?

Is there any evidence that the building of the Disney Wish actually has been slowed down? On this time scale, there is around another year and a quarter building time.

So how is construction on the Disney Wish progressing?

There is very clear evidence that construction on the Disney Wish new ship is progressing well!

Earlier, in March 2020 video was posted which shows the some blocks for the consturction of the Disney Wish being brought to Neptun Werft.

Therefore, this would seem to show that the building of the Disney Wish is going ahead as planned and on schedule.

However, we still have some unknowns.

Meyer Werft was understood to be trying to renegotiating deals on existing orders. They know that it is highly unlikely any cruise line is going to be signing on the dotted line for a new build any time soon,

Therefore it may be that Disney renegotiated if not the timeline for the Disney Wish, it seems likely that they would have got some leeway on the delivery times of the next two Disney Triton Class Ships.

The second and third Disney Triton Class ships were supposed to be launched in 2023 and 2024. Maybe Disney negotiated that they would be delayed. Pure speculation, but Disney does have a lot of negotiating expertise!

It is difficult to see that the current timeline for building the as yet to be named new Disney Ships being stuck to unless the cruise industry gets back to anything like full capacity very soon.

Therefore it might be a while longer than we thought until we see the whole Disney Cruise Triton Class trio of ships sailing the oceans.

Disney is in a much better position than many other cruise lines as it has very high demand, a loyal following, and only 4 ships, but it has been severely impacted.

This will be the first new Disney ship for a decade – since the Disney Fantasy was launched in 2012.

This is the latest pictures from the Meyer Werft Webcam. Unfortunately, but understandably, the webcam only shows stills pictures and these aren’t updated very often.

The Meyer Werft Disney Wish webcam has been turned off for quite a while now and you can’t see pictures of progress at the moment.

The picture below was taken a week before – it’s amazing how the building of the Disney Wish is now progressing.

However, it is amazing to see the progress being made on the construction of the Disney Wish.

Here is video of the Disney Wish bow and keel on their way to the Meyer Werft shipyard. Things are really taking shape!

It is exciting to watch the Disney Wish taking shape.

Things are progressing with the building of the Disney Wish. You can also see the Odyssey of the Seas in the background.

Another big step in the construction of the Disney Wish.

We can see her sailing for the first time – well OK it’s not exactly all of her, but it’s very exciting anyway!

This second video gives you some really great view of the new Disney Wish.

Things really are taking shape now on the construction of the Disney Wish. Here are the mid-hull sections of the new Disney ship arriving at the Meyer Werft shipyard.

Disney Wish Float Out – When Will It Be?

What even is a float out? It’s the first time the ship actually goes in the water. Obviously this will be a major milestone in the construction of the Disney Wish.

It’s when the ship builders can properly assess it is going to float!

It will also be the first time we get a complete look of the exterior of the Disney Wish.

The float out happens before the interior of the Disney Wish will be started. When the exterior is finished, they flood the construction bay and the cruise ship floats out.

After a successful float out they will start on the construction of the Disney Wish interiors.

Here is a video which shows the Disney Fantasy float out in 2012.

When Will the Disney Wish Launch in 2022?

All the factors right now seem to show that they Disney Wish construction is not too far off target. However, we still waiting for the official word from Disney as to exactly when the launch date will be.

Only time will tell. There is no official word from Disney Cruise Lines about the actual date, but we will keep you updated!

When do you think that the Disney Wish will sail in Summer 2022? 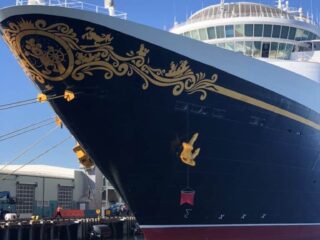 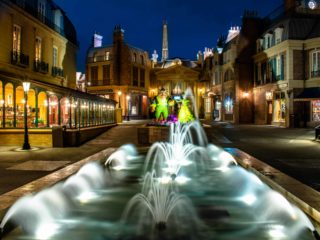