Which Disney World Park Is The Best?

If you have only one day to visit Disney World and can afford to visit one park, which one should you visit – Magic Kingdom, Epcot, Hollywood Studios, or Animal Kingdom?

All of the parks are fantastic and worth visiting, but each of them is unique in some way and are targeted towards certain audiences, whether that’s kids, adults, thrill-seekers, etc.

We’re going to take a look at the attractions, lands, shows, dining experiences, as well as much the overall pros and cons of each park so you can decide which park is better suited for you. 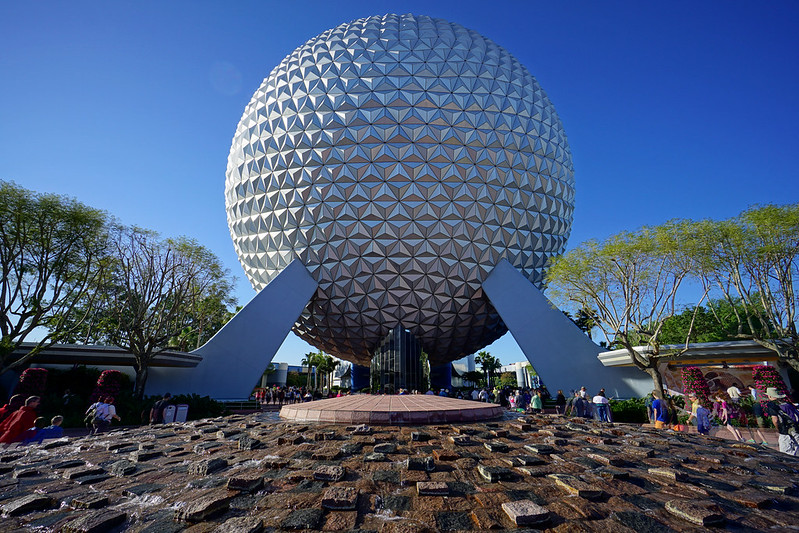 Keep in mind this will be a broad overview of the parks and we won’t be getting into too much detail.

If you want an extensive detailed guide to each of the parks, try reading the unofficial guide books for Walt Disney World. On the other hand, if you don’t have the time to read a whole guide or just want a brief overview of the parks, you’ve come to the right place!

A park where you can escape the troubles of the real world to live out the world of fantasy, yesterday, and tomorrow. It’s like Disneyland in Anaheim, but bigger, and in a lot ways, better. 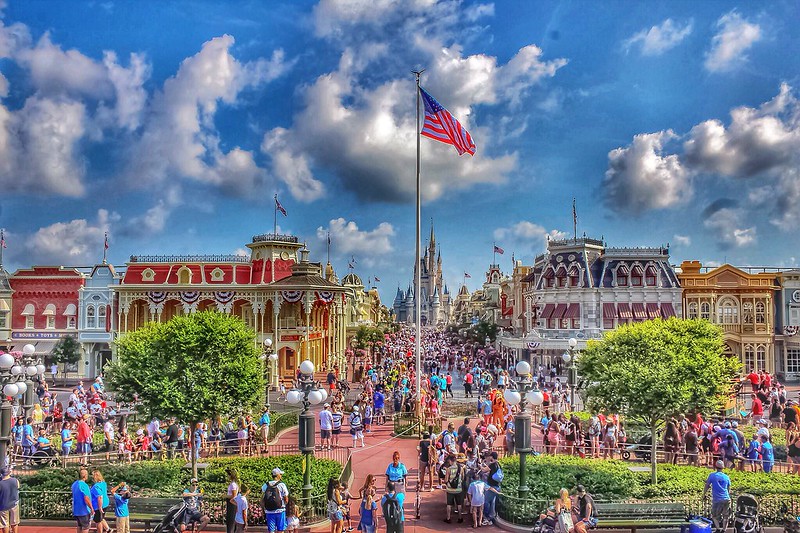 Magic Kingdom has the highest number of rides out of all the parks. They have a good variety of attractions as well – slow rides, dark rides, boat rides, roller coasters, etc.

There is plenty to do for each member of the family. Small children can enjoy all of the slow rides like It’s A Small World, tweens and teens will enjoy thrill rides such as Space Mountain, while adults and seniors will love the mature attractions like The Haunted Mansion. 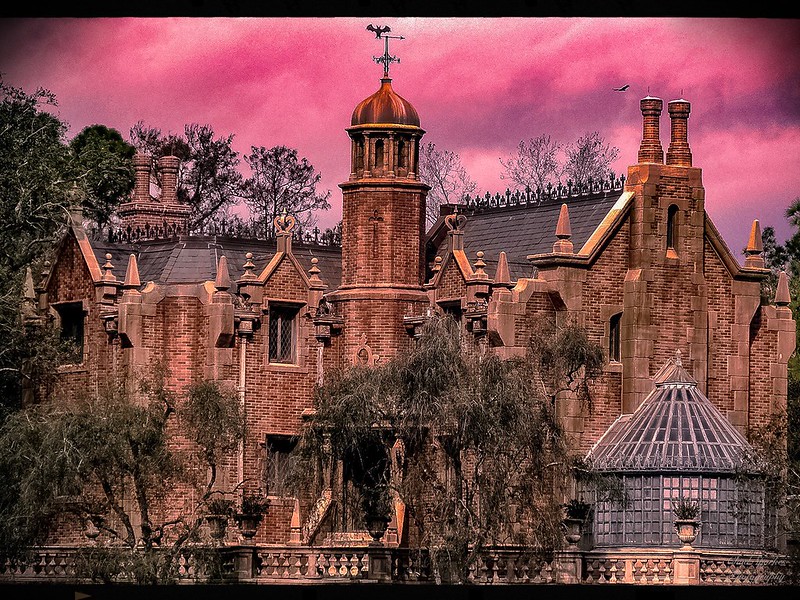 Each age-group has at least a good handful of attractions to enjoy.

The only age-groups that might be turned away by the Magic Kingdom are the teens and young adults. There aren’t many thrill rides intended for those age groups – most of them are fairly tame.

It’s not like Disneyland, which has lots of teen and young-adult focused attractions like Star Tours, Indiana Jones Adventure, or Rise of the Resistance.

Magic Kingdom’s target audience is most definitely families with small children. Other age-groups will still like the attractions, but not as much as the ones in the other parks. 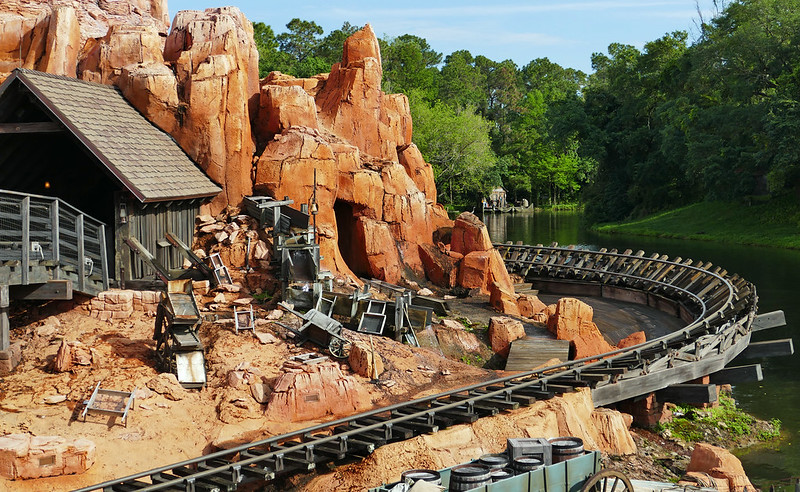 Again, the target audience is families with small children, so the lands and attractions are themed around family friendly genres and movies, such as the Little Mermaid, Snow White, and Monsters Inc.

You won’t see any lands or attractions based on more adult themes or movies, like over at Hollywood Studios which has Star Wars – Galaxy’s Edge.

Here, you’ll see attractions and lands based on Disney Princesses, Pixar characters, as well as many other family friendly characters from Disney franchises.

Short for Experimental Prototype Community of Tomorrow, Epcot is part theme park of the future and part world showcase. 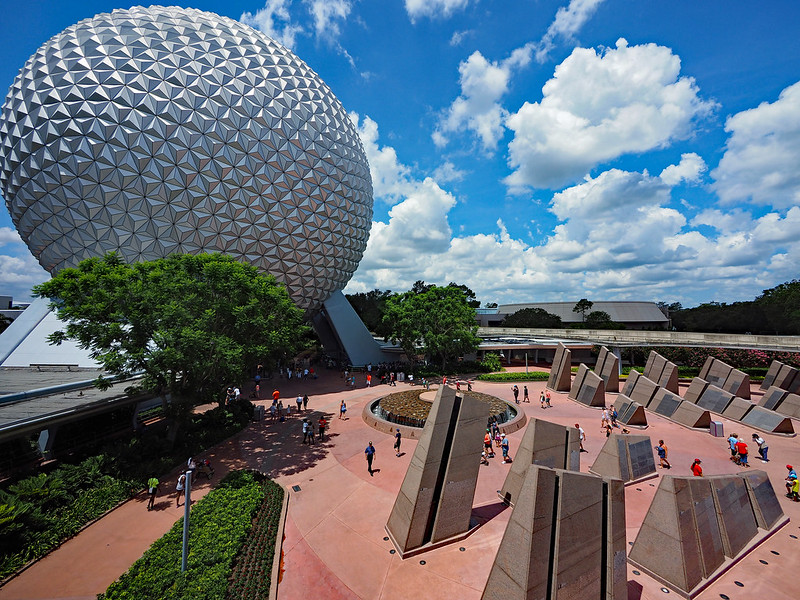 While you won’t find as many attractions as the Magic Kingdom in Epcot, you’ll find a good handful of rides here.

Small children will enjoy rides like Frozen Ever After and the Seas With Nemo & Friends, while adults will love Living With The Land, Soarin’ Around The World, as well as many other attractions around the park.

The age-groups that won’t enjoy the attractions so much are teens and young-adults. There is only one thrill ride, Test Track, which, in my opinion, isn’t even that thrilling. And while Disney claims Mission: SPACE is a thrill attraction, it is underwhelming to say the least. 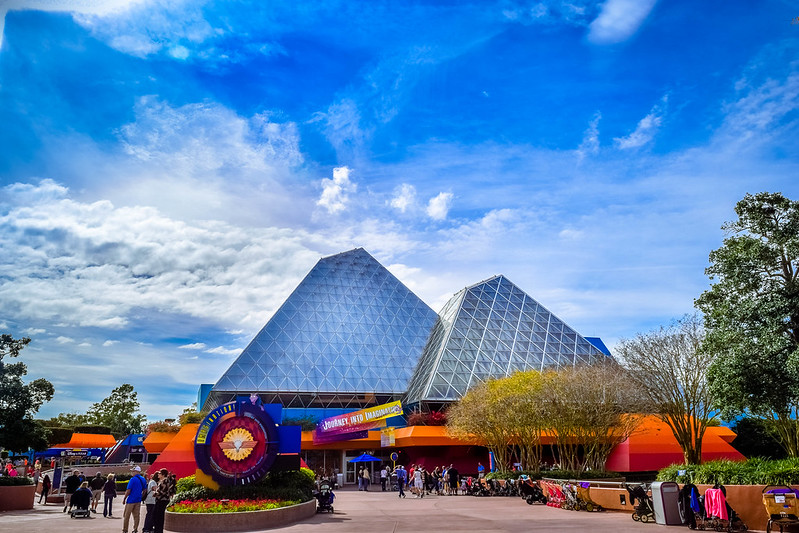 They are opening a new Guardians of the Galaxy roller coaster in 2021, but even once that opens that makes only two thrill rides at the park.

Besides Test Track, there aren’t many rides that the average teen and young adult will enjoy.

I will say, and this is a personal opinion, that this is the weakest park in terms of attractions. I love Spaceship Earth, Soarin’ Around the World, and Frozen Ever After, but there a few duds here and there like Journey Into Imagination With Figment and Mission: SPACE. 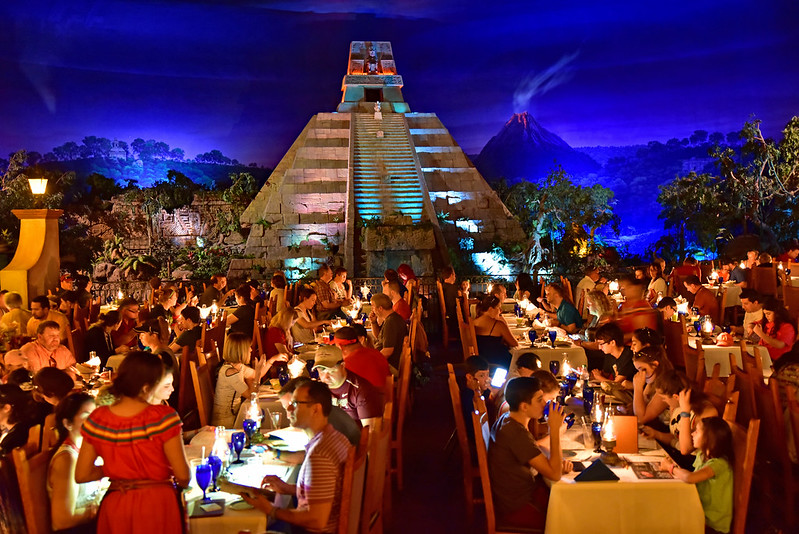 The park is split into two areas – Future World and World Showcase.

Future World hosts a number of pavilions that showcase innovative technologies. The goal of these pavilions is providing guests with edutainment – education that’s entertaining (trust me, it’s much better than it sounds).

Some of the futuristic elements of Future World are a little dated, but they’re going through a massive overhaul of the area to make it more up to date.

Epcot World Showcase consists of different areas each representing a country from around the world, such as France, China, Italy, and, for some reason America… But you’re already in America, so why did they have an American pavilion? Anyway…

There are only two attractions in this area, Gran Fiesta Tour Starring The Three Callebreros (who…?) and Frozen Ever After. Soon they will be opening two more attractions – Remy’s Ratatouille Adventure and an untitled Mary Poppins dark ride (although this is postponed indefinitely right now). 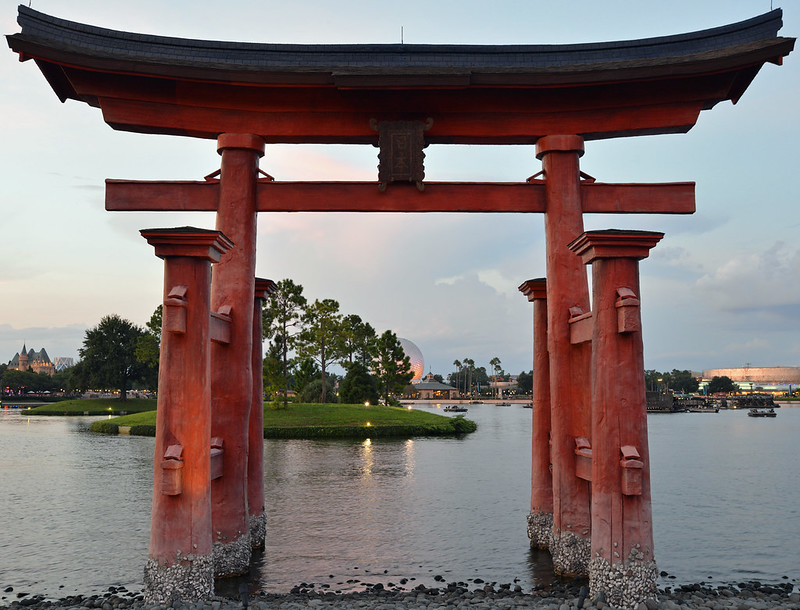 The focus of this area is to immerse you into these different countries. They take the same architecture, food, merchandise, and much more from those countries in order to create as accurate an experience as possible. So if you don’t have time to take a Gap Year, just go to Epcot.

This area is most definitely aimed towards entertaining adults: there isn’t much for kids to do. I can tell from personal experience that for a kid, this area is pretty boring. When I used to visit as a child it was my least favorite park – now I have grown into it much more and can see the appeal.

Adults adore this area though. It’s so much fun immersing yourself into a different country and the theming is absolutely beautiful. And while kids probably won’t like World Showcase, they’ll certainly enjoy Future World.

It’s a little difficult to give a short description of the park as the original Hollywood theme of the park has been skewed over recent years, much like California Adventure at Disneyland Resort. Now, only around 50% of it is themed around Hollywood. Nonetheless, it’s a great park. 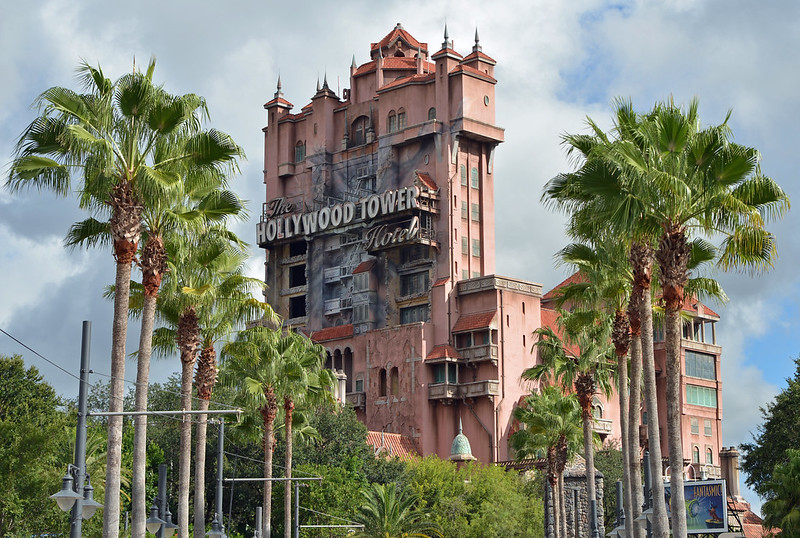 Then of course, there’s Rise of the Resistance, a fifteen-minute highly immersive experience where you escape from a Star Destroyer, which includes live actors, ginormous jaw-dropping set-pieces, and a trackless ride system. It’s the best theme park attraction in the world.

They also have the best live performances at the parks, such as Voyage Of The Little Mermaid, Indiana Jones Stuntacular, Beauty and the Beast and Fantasmic. 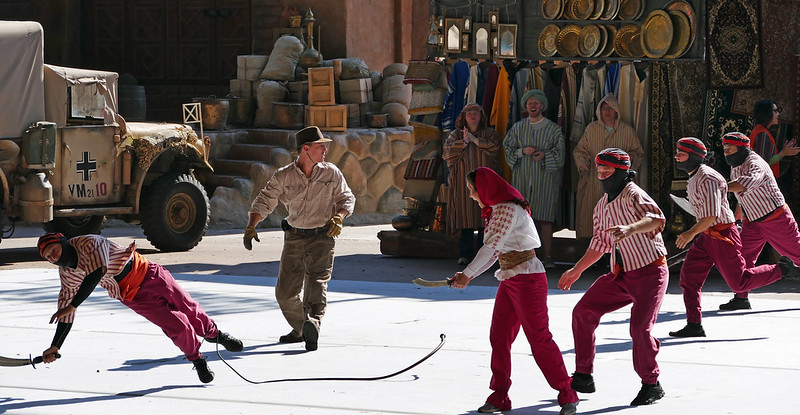 Out of the four parks, teens and young-adults will enjoy Hollywood Studios the most. All of the thrill-rides are great, and overall the attractions are much more exciting and technologically advanced, such as Millenium Falcon – Smuggler’s Run.

Again though, if you’re looking for a park with lots and lots of attractions, perhaps got to Magic Kingdom. However, if you want to ride some of the best attractions at the resort, Hollywood Studios is the place to go.

The main draw of this park is Star Wars – Galaxy’s Edge, a whole area themed around the Star Wars franchise. If you’re a Star Wars fan, Hollywood Studios is the best park for you.

The other lands are good too, but not as interesting as some of the other lands at Magic Kingdom, Epcot and Animal Kingdom. I go to theme parks so I can visit different worlds, and besides Toy Story Land, the lands here feel too mundane. I mean two of them are themed around Hollywood streets. If I wanted to do that, I’d just go to Hollywood.

There isn’t particuarly a target audience for this park – anyone of any age can enjoy it in some way.

The only major problem of this park is it’s pretty small compared to the others.

Disney’s Animal Kingdom is both an extremely impressive animal park as well as a theme park. 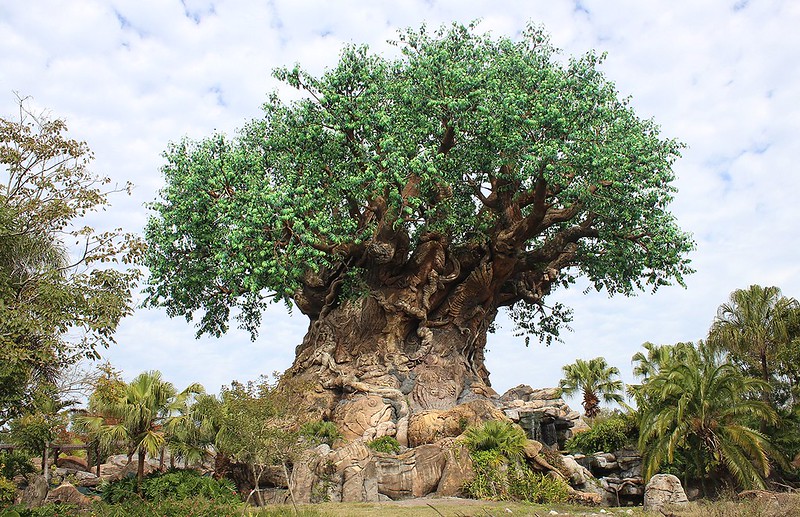 Like Hollywood Studios, this park doesn’t have many rides, but the ones they do have are absolutely fantastic. Rise of the Resistance holds first place for greatest theme park attraction in the world, but Avatar – Flight of Passage is a close second. 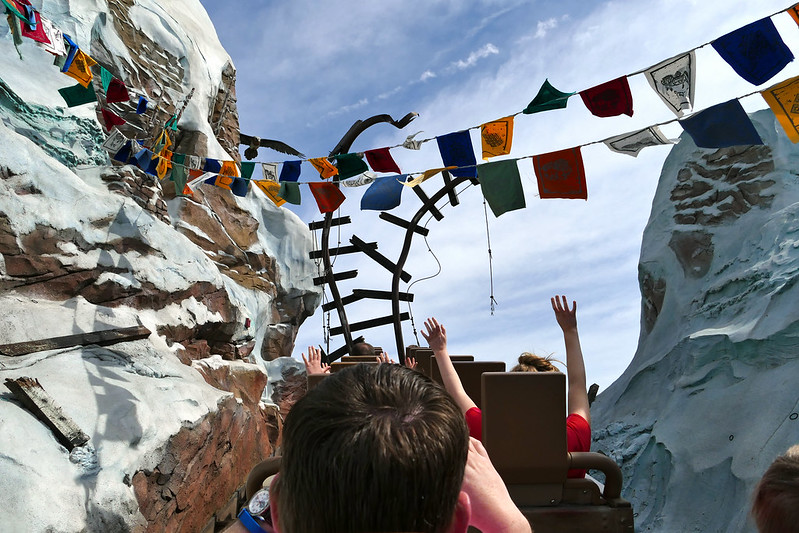 Two other highlights are Expedition Everest: Legend of the Forbidden Mountain, a roller coaster through Everest, as well as Kilimanjaro Safaris, an immersive African safari experience complete with live animals.

You can also visit the animal exhibitions, where you can see gorillas, tigers, giraffes, as well as many other kinds of animals. What makes these exhibitions unique is they’re themed to the animal’s native environment. So if you go see tigers, the area will be themed around an Asian jungle.

My favorite animal encounters are the Maharajah Jungle Trek, Rafiki’s Planet Watch, and Joe Exotic’s Tiger King: The Ride – 3D (okay, that last one doesn’t exist, it was just a joke).

No matter what age you are, there is something for you. Kids will love seeing all the animals, teens can enjoy thrill rides like Kali River Rapids, and adults can enjoy immersive attractions such as Na’vi River Journey. 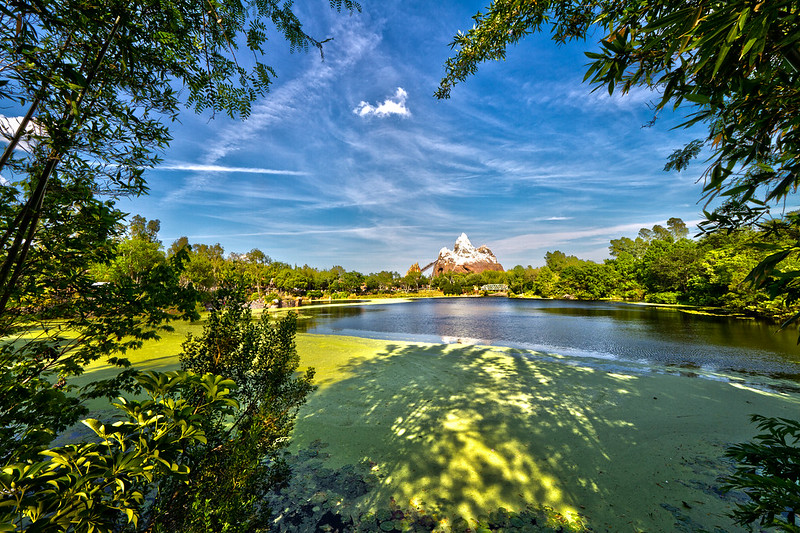 Out of the four parks, this is the most beautiful. It’s a park entirely themed around the beauty of nature and many of the areas of the park, especially Pandora – The World Of AVATAR, are absolutely breathtaking. Lovers of nature will adore this park.

Something that sets this park apart from other zoos is it not only focuses on animals living in the present day, but also animals from our past as well as from myths and fantasies.

Some examples are Expedition Everest’s story being centered around the mythical yeti and a whole area dedicated to dinosaurs, called Dinoland U.S.A.

If you’re not so keen on animals and nature, this park may not be the best for you. Otherwise, this a great park for nature and lovers! 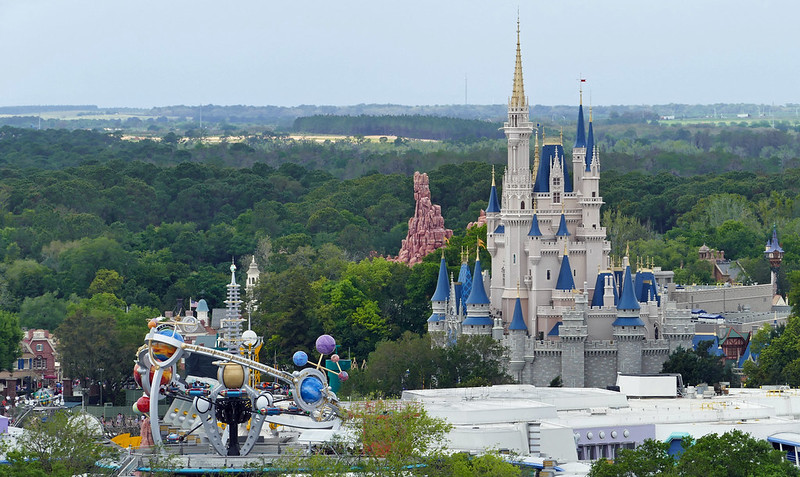 If you’re a family with small children, go to Magic Kingdom. If you’re looking for a more adult park, go to Epcot. If you want great, outstanding attractions, go to Hollywood Studios. If it’s theming you’re after, go to Animal Kingdom.

Most likely, anyone, no matter their age, interests, likes, dislikes, etc., can find something to enjoy in any of the Disney World theme parks.

My personal favorite is probably Hollywood Studios, since the attractions there are so amazing. My least favorite is Epcot, since I find a lot of the theming to be a little dated and I’ve never been a huge fan of World Showcase.

However, I love all the parks, and I’m sure you’ll love them too! 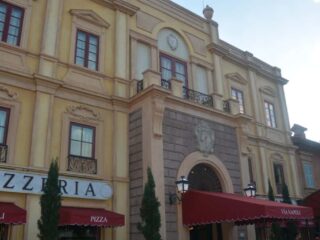 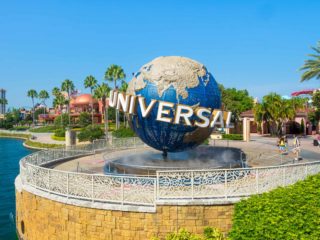