Disney Wish Godmother – Who Will It Be?

Who will the new Disney Cruise ship, Disney Wonder have as her Godmother?

No official announcement has been made yet, but it’s a lot of fun to speculate about who will be chosen as the Disney Wish Godmother.

Who are the Disney Ship Godmothers?

Let’s start by talking about who the Godmothers of the current Disney ships are.

The first Disney ship Godmother was Patricia Disney, the wife of Walt’s nephew Roy Disney. When Disney Magic was launched in 1998 Patricia Disney was chosen as the Godmother.

When the Disney Wonder was launched the following year, instead of the traditional choice, Disney awarded the honor to Tinker Bell.

Always a trailblazer in cruise ship innovation, Disney may well have been the very first to appoint a fairy as a Godmother.

When the Disney Dream was launched in 2011 her Godmother was Jennifer Hudson.

Her Disney roots go right back to the Disney Wonder where she used to work as part of the entertainment team.

Mariah Carey is the Godmother of the Disney Fantasy which was launched in 2012.

JOIN MY DISNEY WISH GROUP FOR NEWS AND GIVEAWAYS!

Who Will Be The Godmother of the Disney Wish?

There is no official announcement from Disney yet as to who the Godmother will be and we expect it will be sometime late into 2021 and maybe into 2022 before we get the official word.

However, it is always fun to think about who Disney might choose for the next Disney ship Godmother.

Here are some suggestions (in no particular order):

Jodi Benson is one of the most beloved of the Disney Princess voice actresses. She voiced Princess Ariel in the Little Mermaid. We feel as though she has to be one of the leading contenders for the position of Godmother to the Disney Wish.

Jodi won the role of Princess Ariel over 500 other contenders for the role.

She has also appeared in other Disney roles. She provided the voice for Barbie in Toy Story 2 and Toy Story 3. She was also Helen of Troy in the made for television series Hercules.

Jodi also played a live-action role in Disney’s Enchanted. If you listen very carefully you can hear her “Part of Your World” playing in the background during her scenes.

Disney Cruise Lines has never had a Disney Princess as a Godmother. And obviously, Princess Ariel has an affinity to the ocean, even though she was prepared to give it all up for a Prince…

This one might be a long shot as Emma Watson is more closely associated with the Harry Potter franchise than with Disney.

Emma Watson played Princess Belle in the live-action version of Beauty and the Beast.

Now whatever you think of that movie, and really, it was not what many had hoped it would be, Emma Watson was a very likable and mostly modern Belle.

She would certainly be a popular choice, particularly among the younger Disney cruise fans, but I feel she is a long shot for Godmother of the Disney Wish.

Her association with another franchise, which after all has a very serious rival alternative theme park in Universal’s Wizarding World, might put her out of the running.

I have to confess Julie Andrews would probably be my favorite choice.

Julie Andrews is of course a legendary actress. The perfect voice. She has had a career spanning over 50 years and has been involved in a number of Disney movies, the most notable of which is of course Mary Poppins.

I feel that Julie Andrews really has to be a strong candidate for the choice of Godmother for the Disney Wish. There really isn’t anyone with a more distinguished Disney background.

Who better than Queen Elsa herself as the Disney Wish Godmother? Idina Menzel certainly has to be in line for this role of Disney Cruise ship Godmother.

Disney’s Frozen movies have been a huge success. The Frozen movies are a multi-billion dollar franchise for Disney. Idina Menzel’s amazing vocal performance as Elsa could be recognized by making her a Godmother of Disney Wish.

Idina Menzel won Academy awards for Let it Go and Into the Unknown and we think she has to be a front runner for this honorary title from Disney Cruise Lines.

Disney’s Frozen will also be one of the Disney Wish Shows.

Kristen Bell also must be on the potential Disney Wish Godmother list.

She and Idina Menzel really equally deserve this accolade. Therefore, maybe we could see two Disney Wish Godmothers? It is probably unfair to choose one over the other so why not make both of them Godmothers of the Wish?

Or one for the Disney Wish and one for the next ship which has been ordered. Of course, the dates of that are very uncertain, but should you really give the honor to just Elsa and not Anna?

Could Rapunzel be the Disney Wish Godmother? We already have one Disney character as a Godmother – Tinker Bell has that honor on the Disney Wonder.

We already know that Rapunzel from Tangled will be the character who adorns the stern of the Disney Wish.

Could Rapunzel be Godmother for the Disney Wish?

Possibly, although we think this is an unlikely choice. It is much more likely that the association with Rapunzel and Tangled will be in a restaurant, show, or even a bar for the Disney Wish.

Want to Know More About the Disney Wish Cruise Ship?

We are the number one independent resource for everything Disney Wish! Keep up to date with everything including news of the launch, itineraries, and upcoming sailings by joining our Group!

JOIN MY DISNEY WISH GROUP FOR NEWS AND GIVEAWAYS!

We are very excited about the launch of the Disney Wish.

Here are lots of articles to help you learn all about the amazing Disney Wish!

Should I Book Concierge on the Disney Wish?

What Shows Are on the Disney Wish?

Who Do You Want as the Disney Wish Godmother?

Who do you want to be the Godmother of the Disney Wish Cruise Ship? Let us know in the comments below. 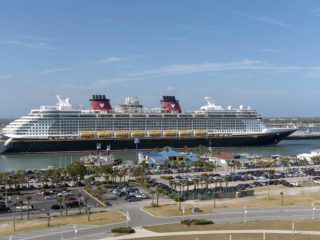 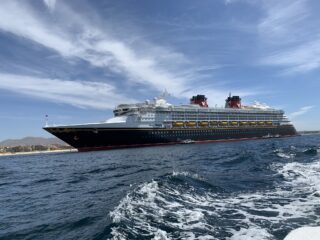 I’d say she’d have a godfather and that is Commodore Tom Forberg who was the captain on the Disney Magic all the way until January of last year when he retired.

I vote for Julie Andrews to be the WISH Godmother

Mandy Moore would be a nice tie in with the Rapunzel connection.

I think Princess Charlotte should be her godmother. What could be better than a real Princess.