Disney Wish Restaurants What You Need to Know

Want to know more details about the Disney Wish Restaurants?

The new Disney Wish will launch in June 2022 and we are learning more and more about what amazing features will be onboard.

A huge part of the Disney Cruise experience is dining together as a family. The design team for Disney Wish has created some innovative new dining experiences.

There are three types of dining on any Disney Cruise Ship:

Let’s look at each of these in turn and find out what we know about these new experiences on the Disney Wish.

All of the Disney ships have a unique concept – rotational dining.

On each ship, including the Disney Wish, there are three main dining restaurants. Guests “rotate” between the restaurants, which means that they will dine in a different place each evening.

As the Disney Wish will be mostly sailing 3 and 4-night itineraries, this means that guests will dine in each restaurant at least once, and one of the restaurants twice.

As soon as you board and are given your Key to the World you can see your dining rotation.

The brilliant concept of rotational dining is not only do you get to dine in each restaurant, but your Servers come with you.

This means that your Servers have the chance to get to know you and your dining preferences so that they can make your experience even more magical.

The Disney Wish will have 3 rotational dining restaurants:

Here is a video which shows an overview of the new Disney Wish rotational dining restaurants:

Anna, Elsa, Olaf, and friends will have a very special place on the Disney Wish.

Guests will get to dine in the magical kingdom of Arendelle in Anna and Elsa’s Royal Palace.

The new Disney Wish restaurant will be named Arendelle – A Frozen Dining Adventure.

It will feature entertainment whilst you eat. There aren’t really any details yet about what this will be.

The video footage did not give too much away, but it seemed to suggest that there would be a central stage where the beloved Frozen characters will perform during the meal.

One thing I did notice about the concept art was that there seemed to be a lot of very large tables.

To me, this seems like a lot of tables in long rows. This gives the restaurant more of a look of a banqueting hall, which obviously is appropriate for Anna and Elsa’s Palace.

However, I doubt that this will be the case in reality. Usually, on a Disney ship, most of the tables seat from 4 to 8 guests. Some are larger if you have a large party.

You can request your own private table if you want.

The cuisine will feature World-Class Cuisine infused with Nordic Influences.

1923 Restaurant on the Disney Wish

This is a design that few had predicted, but once you start thinking about it, makes so much sense.

The reference to 1923 is the year in which the Walt Disney Studios first opened. The theme will be 1920’s Hollywood glamor.

It made me think about the design of the fabulous Carthay Circle Restaurant in Disney’s California Adventure.

The design just looks beautiful, with the dark woods, subtle lighting, and of course the collections on the shelves which line the walls.

You can see Mrs. Potts and Cogsworth in the display cabinets.

Not much was said about the menu other than it will be “classic Hollywood elegance combined with a menu inspired by California’s fusion of cultural flavors”.

The design of all the ships incorporates many elements which remind you and make you realise that all this started with one man (and a mouse of course).

But it seems as though 1923 will be very much a place of nostalgia where you are encouraged to step back into the world which Walt Disney knew.

This Disney Wish restaurant is intended to be a place where we can imagine seeing Walt and his family sitting there with us. I’m certainly looking forward to that.

Another brand new dining experience will be Worlds of Marvel. Disney already had Marvel Days at Sea, but this is going to take the integration of the Marvel Universe on the Disney ships to a whole new level.

The concept sounds amazing and the introduction of a Marvel dining experience is sure to be very popular.

“You will be transported to an adventurous technology showcase where you will play an interactive role in an action-packed mission that unfolds around you”.

We are promised a First-of-its-Kind Cinematic Dining Adventure. It looks as though there will be live characters combined with highly innovative technology to make this a unique dining experience.

The backstory is that Ant-Man and The Wasp are attending a speaking engagement representing their fellow Avengers.

They will be talking about and showcasing a presentation of the Super Hero technology to show to the Disney cruisers.

This is what you will find at the center of the table.

The video suggests that the Imagineers have actually found a way to shrink and expand objects!

Now I know they are talented, but I think this may have a few scientific principles in its way. However, I can’t wait to see how the Avengers restaurant experience unfolds.

All Disney Ships have a large amount of space that is dedicated exclusively to guests aged 18 and over.

As predicted, the Disney Wish will continue the tradition of all the Disney ships and will have Palo on board.

There is something a little different for the second fine dining restaurant though – it will not be Remy.

This isn’t a restaurant, but I simply had to mention the Star Wars Hyperspace Lounge.

This most definitely is what Star Wars fans have been waiting for. Finally, a Star Wars bar on a Disney cruise ship.

Star Wars Hyperspace Lounge is the first of its kind. You will board a luxury spaceship where you will be able to enjoy out-of-this-world drinks and look out of the “window” to see panoramic views of the Galaxy.

The bar which will be in the adult dining space is themed for Disney’s Beauty and the Beast.

The Rose Bar will probably be much like the concept of The Meridian Bar on the Disney Dream and Fantasy.

A place to go prior to dining in the adult-only restaurants, or indeed to enjoy even when you aren’t dining there.

Notice too that it is called Palo Steakhouse. This is not a title that is given to any of the other Palo’s on the other Disney ships.

The concept is to combine “sophisticated Italian dining with the refinement of a modern steakhouse”.

We haven’t had too much detail yet about Palo on the Disney Wish. I would imagine that they will continue the very popular Disney Palo Brunch traditional in addition to offering a nightly dinner experience.

Enchante on the Disney Wish

The ultimate in fine dining on the Disney Wish will be the new Enchante restaurant. Inspired by Beauty and the Beast’s Lumiere

The menu will be crafted by Three-Star Michelin Chef Arnaud Lallement.

Remy on the Disney Fantasy and Dream have established themselves as offering one of the finest dining experiences at sea. No doubt the Disney Wish will elevate the experience even more.

We still don’t have many details about Enchante on the Disney Wish – but we will post them here when we do.

The Disney Wish is breaking with the tradition of having a Cabanas buffet on the pool deck.

Now is a pretty sensitive time to be talking about buffets on cruises. Whilst Disney has announced some details about the casual dining spaces and options it has not yet confirmed whether or not this will be a serve-yourself buffet or if servers will plate your selections for you.

The new buffet is called Marceline Market on the Disney Wish. This of course pays homage to Walt Disney’s hometown.

The concept art looks very stylish and contemporary. There will be 10 different stations to choose from.

You can’t see too much about the design but hopefully, the stations are a decent distance apart to prevent too many guests standing in line (remember Beach Blanket anyone)?

The food stations will be themed around classic Disney movies such as Tangled, Alice in Wonderland, Zootopia, and Ratatouille.

We have been told that the local proprietors will be the characters themselves! Does this mean that Judy Hopps is going to serve you a salad? Is Alice going to be passing out tea and sandwiches? I can’t wait to find out!

There is also a very contemporary and welcoming bar area. There will be plenty of seating both inside and out for the Disney Wish buffet.

There will be additional food options on the pool deck. You are going to find something for even the pickiest eater!

The Mickey and Friends Festival of Foods will be a wonderful place to grab a quick breakfast, lunch, or snack at any time of the day.

The Disney Wish will have DCL’s first Mexican counter service venue as well as a new BBQ eatery.

And you bet there will be a place to get that Dole Whip – for an extra charge of course.

More About the Disney Wish

The Disney Wish will have her maiden voyage on 9 June 2022. This will be a special sailing of 5 nights.

The Wish will sail out of Port Canaveral on 3 and 4 night itineraries. She is taking over these sailings from the Disney Dream who is going to Miami.

We have written many guides to the Disney Wish and there will be many more to come soon!

Will you be sailing on the Disney Wish? 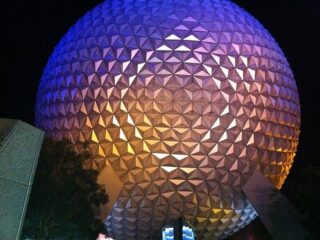