How Long to Stay at Disney World

One of the questions I get the most often about Walt Disney World is how long you should stay.

Once people get a sense of just how big Disney World is and how much there is to do, it’s the first thing they think.

Then they start to ask how long to stay at Disney World?

There isn’t an easy answer and it seems everyone has their own opinion.

Disney World is not just a trip to the Magic Kingdom. There are four theme parks, two water parks, and a huge entertainment and shopping district to experience.

How long to stay at Disney World is a very important question, because staying at Walt Disney World even for one night doesn’t come cheap.

The Walt Disney World Resort Hotels are fabulous places to stay but they definitely come at a price.

However, the question also has no simple answer since the budget is only one factor in a host of other pieces to the equation.

How long to stay at Disney World depends on several things, but it’s an important question that deserves a straightforward answer.

The answer to the question will be different according to your own personal circumstances.

To get there from here, we’ll need to first consider the main attractions – the Walt Disney World theme parks.

How Long to Stay at Disney World Parks

Before we can arrive at any decision directing the number of nights you lodge or days you spend in the Walt Disney World resort area, we need to look at the theme parks individually.

That’s because not all Disney World theme parks are equal in the length of time they need to experience them.

You can enjoy any park for any length of time from 1/2 to three days or more!

Each day costs more of course, but the cost of each day goes down the more days you purchase.

Prices also vary according to the days that you visit. Peak attendance days are more expensive than historically quieter days.

These prices are correct in September 2022 and will vary. They are likely to increase.

A Walt Disney World vacation takes some planning and you need to think about which of the parks you want to prioritize and where your family wants to spend the time.

Here is a quick look at the value of each Disney World theme park in terms of my minimum recommended duration.

Even with the recent expansions, Disney’s Hollywood Studios is still the smallest park.

Although it does have some outstanding attractions, in many ways this is the Disney park with the least to offer.

Remember, much of the original park was removed to make room for the so-called expansion.

While Galaxy’s Edge may be slightly more entertaining than the Streets of America (the former space the land occupies), it is replacement space rather than additional space which would require more time.

If you are a Star Wars fan then you are going to be in your element here. Rise of the Resistance is one of the best attractions ever built.

The attractions roster at Disney’s Hollywood Studios is genuinely impressive, but there is little to fill in the spaces.

Because of this, you can get everything you want out of this park in less than a full day.

This is an ideal park to Park Hop from if that is part of your plan.

The only exception is if you plan to have two or three meals in the park, which is possible.

The themed restaurants in Disney Hollywood Studios are practically attractions themselves.

If meals are a big part of your vacation plan, then you should allow for a full day at this park.

Check out the Sci-Fi Diner or one of the other excellent restaurants in Hollywood Studios.

How much time do you need to spend in Disney’s Animal Kingdom?

Animal Kingdom is a park that I have come to appreciate more and more over the years. Not just for the attractions, but for the overall ambiance, theme, and brilliance of the small details.

Truthfully, you can have your fun and leave before the day is through.

However, the half-day status of Animal Kingdom park is hotly contested.

The main reasons are the size and the variety of experiences you can have.

Since there are so many animal viewing areas and learning experiences on top of the E-ticket attractions, entertainment, and dining you can spend a very long day doing everything at this park.

On the other hand, the park has only five areas and only one major attraction in each.

If you don’t care to explore too much into each themed area, you can gloss over the details and be completely done in much less than a full day.

The time spent in the park will then largely depend upon the wait times for the major attractions such as Flight of Passage.

This amazing ride is one of the best in the whole of Walt Disney World. Waits of around 90 minutes are typical and can be even worse.

One reason to make your visit last all day is that Animal Kingdom is the most difficult park to hop from.

There is no special transportation other than buses to take you to other parks or resorts.

Additionally, there are some genuinely good restaurants to try.

Pandora is open all day, but at night it’s a spectacle. So there are reasons for sticking around.

Take it slow and steady and stop often to take in the animal exhibits that may be tucked away out of view.

Disney’s Magic Kingdom is in many ways the opposite of Animal Kingdom.

Here you rarely feel as though you have time to sit down, observe and relax.

There are so many attractions to be experienced at Magic Kingdom, that it can be difficult to know where to start.

It certainly isn’t a place for relaxation!

Planning is key – so you really should do some research about which rides are your priority, and have a plan for the day.

Crowds can impact a lot on your experience so it is important to do your research before you go.

You could easily experience the Magic Kingdom with no regrets in one day. Your feet are going to hurt and you will probably be exhausted but in a good way.

Two days at Magic Kingdom is best because it takes off some pressure.

If you have park hopper passes, you can concentrate on one-half of the park before leaving.

Then, on the following visit, see the other half.

If one of your days is a nighttime visit (ie. the second park in a day) make that the visit for Tomorrowland since it looks best at night.

If you visit Magic Kingdom in only one day, start as soon as it opens, and don’t leave until it closes.

It’s a good idea to plan your trip so that the day following a long day at the Magic Kingdom is set aside for a day of lounging or casual resort hopping.

Suffice it to say that whether you take Magic Kingdom on in a day or two, it will take a second day anyway for recovery!

It can be exhausting.

You will hear it said that Epcot is the second-largest Disney World park.

And this is true of the overall park size. The largest is Disney’s Animal Kingdom.

However, Epcot really feels like the largest. The reason for this is that the part open to the public that you walk around is much bigger in Epcot than in Animal Kingdom.

Yes, Animal Kingdom is the largest park in terms of acreage. But a lot of that is taken up with the huge savannah area – and guests don’t walk here. This is part of the Kilimanjaro Safari area.

Epcot is also the easiest park to travel through. You can take as little or as much time as you like roaming the gardens, enjoying the pavilions, and exploring at your leisure.

Epcot is not known to have many attractions, but there are plenty of rides and shows to enjoy as you shop and dine around this unique theme park.

Currently, there is still a lot of construction, but areas are slowly reopening and better than ever.

The World Showcase can be a whole day at least.

Which is the Best Restaurant for Families in Epcot?

If there is a festival going on (there almost always is), you can add another day, just for that.

You really should take some time to enjoy one of the fabulous restaurants in Epcot.

Because of the many different aspects of Epcot, a solid approach is to break up your visits by park-hopping and returning on multiple days.

I have never had a Disney stay where I felt I spent too much time in this park, so at a minimum I suggest two easy-going days.

Other Things to Do at Walt Disney World

Besides the theme parks, Walt Disney World also has two water parks Blizzard Beach and Typhoon Lagoon, Disney Springs, of course, and about twenty resorts to visit and explore.

If you want to visit a Disney Water Park you most likely will have to pick either Blizzard Beach or Typhoon Lagoon.

The Disney Water Parks are a lot of fun, but lots of families do skip them as they want to prioritize the theme parks on their vacation.

There are plenty of recreation and entertainment opportunities that don’t need a Disney park ticket.

These extras make a Disney vacation more fun and exciting, but often people overlook these as options.

Touring the Disney Hotel Resorts can be a great thing to include in your itinerary, particularly for the day you arrive or leave Orlando.

Of course, you don’t need a ticket to explore the hotels. But you can have a lot of fun exploring the resorts and even enjoying one of the great restaurants such as those in Disney’s Animal Kingdom Lodge Resort.

Theoretically, you could experience all the parks in just three days with park hopper passes.

However, that is not enough time to enjoy any of it fully. You would most likely be exhausted and really not have had enough opportunity to experience anything properly.

Likewise, you can easily stay for 10 days at Disney World and still leave wanting more.

If you want to know how many days you need at Disney World, 8 days gives you reasonable exposure, counting your arrival and departure days.

That’s plenty of time to get satisfaction out of each park without tiring yourself out.

If you plan your trip with 7 nights in mind, that should help you decide where to lodge so you stay within budget on your trip.

Of course, this is an ideal number and if your individual circumstances don’t leave you with the option of this much time, you can still have a wonderful time at Disney World.

Just make sure that you plan well and understand that you will need to decide to miss some things out and prioritize the things you want to do the most. 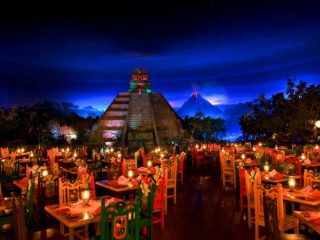