Wondering what is on the Disney Cruise Pirate Night Menu?

Here you can discover exactly what is on the Pirates In The Caribbean Dinner Menu. I include lots of pictures and reviews of the Pirate Night food.

Pirate Night is one of the most popular themed events on a Disney Cruise.

You will have Pirate Night on all Disney Caribbean and Bahamian cruises.

They also have Pirate Night on the Disney Cruises from San Diego.

There are many different elements to Pirate Night – the finale is a show with fireworks at the end of the evening.

Many guests dress up on Pirate Night, the characters will be in their pirate costumes, and there will be other pirate-themed events.

The Pirate Night Dinner Menu is a special-themed dinner, so it will be served in all three rotational dining restaurants.

Usually, each Disney Cruise restaurant serves a different menu in the evening, but when there is a themed night such as Pirates Night, all the restaurants will be the same.

When you arrive at your table for dinner the bread is usually already on the table.

It is very tempting to eat a lot of bread before you have even ordered your meal!

The Pirate Night bread service is not my favorite.

The cornbread is tempting but the relish is not the best.

I am not a big fan of mango, so this dip is definitely not one that I indulge in.

I always order the Vegetable Samosa. It is good and I particularly like the Tamarind Chutney.

The shrimp cocktail arrives at your table looking as it does above.

Then your server tips it out on the plate so it is displayed like the image below.

Slightly bizarre presentation not winning a lot of approval on visual appeal or taste!

I always order a Shrimp appetizer if there is one. As you can see from the picture, most of this is shredded lettuce……

The Lobster Crab Cake is one of my favorite Disney Cruise Menu appetizers. I always love crab cakes, and the coleslaw side is delicious as well.

This is one of my favorite soups. I love Cilantro and although the Banana Bread Croutons may sound a bit unusual, they really work with the Carrot Soup.

My son enjoys this Fennel Orange and Quinoa Salad. It is a great combination of flavors with the addition of Pine Nuts and Pomegranate.

Join the Best Disney Cruise Group for Tips and Giveaways

PIRATES IN THE CARIBBEAN DINNER ENTREES

The Grilled Shrimp and Seared Scallops are deliciously paired with a tasty tomato sauce.

The Disney Cruise Pirate Night Menu is really not one of my favorites.

There are some unusual taste combinations that I am not convinced work very well. However, this Shrimp and Salad entree is really rather good.

This Caribbean Grouper Filet is another great choice from the Pirates in the Caribbean Menu.

DH very much enjoyed this Lamb Shank with Rosemary.

This is another one of those dishes on the Pirate Menu which just doesn’t look good. The taste is pretty average, but it takes a lot to get over the strange dark colors and presentation.

This vegetarian Pirate Night entree of Falafel is nothing particularly special – it is just fine but nothing to really make you want to order it again.

My children always had this option when they were younger and they wanted something that they knew they liked as it doesn’t have a strong flavor.

There is a good choice of desserts on the Disney Cruise Pirate Night Menu.

There are also always lots of After Dinner Drinks, both alcoholic and non-alcoholic. These are available for an extra charge. Coffee and tea is included.

I always enjoy this Bananas in Paradise Cake as it is a great balance between chocolate and fruit.

Not too heavy after you have eaten all that food!

The Carmel Macadamia Nut Cheesecake is a great way to finish off your Pirate Dinner.

There is always a kid’s menu available on a Disney Cruise and this is the one for the Pirates Night Menu.

Chef’s Entree Selection of the Day

For The Main Event

On many of the Disney Cruises that I have sailed on, there has been a late-night buffet on Pirate Night.

This follows the show and fireworks so was always set around 10 pm.

However, on some cruises that I went on they didn’t have this.

Since sailings resumed the Disney Pirate Night buffet has been reintroduced – but only on some sailings.

The best way to see it is if it happens that is a bonus, but do not be surprised if it doesn’t.

There used to be so much food available it was, to be honest, rather over the top!

Once all the Pirate festivities are over you will be wanting to get back to your stateroom.

This very creative towel animal, or blanket animal, will be waiting for you.

And you even have some chocolate gold coins to share!

Overall Pirate Night is a lot of fun.

You can go all out and really get into the Pirate theme, or just wear your bandanas that Disney provides for everyone.

However, I do have to admit that overall the Pirate Night Dinner Menu is not my favorite. There is no real stand-out menu option for Appetizers, Entrees, and even Desserts.

For this reason, I have sometimes opted to Dinner at Palo when it is Pirate Night.

The one reason that stops me from going to Palo Dinner is that I enjoy the rotational dining restaurants so much.

However, after years of Pirate Night Menus, I now know this is the one that I will skip if I am given the choice.

Want to know more about Disney Cruise Dining? I have written many different guides to dining on a Disney Cruise so that you know what to expect before you go:

What is the Worst Food on a Disney Cruise?

The Ultimate Guide to Restaurants on the Disney Dream

Join the Best Disney Cruise Group for Tips and Giveaways 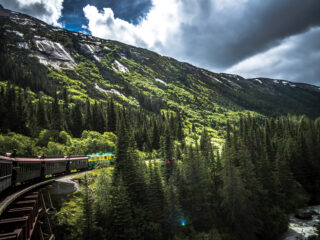 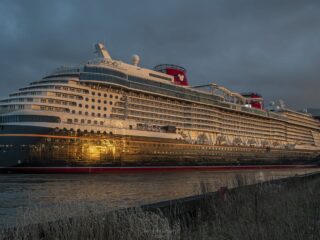